Early this year, I posted a blog entitled Iraq in the coming decade. In it I argued that the city of Babylon on the Euphrates will play a major role in the end times. In the conclusion I wrote:

It would therefore not surprise me if in the next few years the Jewish state gets a “dependance” in Iraq. A world trade center where Jewish capital is flourishing but also dominates the Middle East. I apologize that I cannot indicate any reason for the latest claims in current events. But I do not claim it as a political analyst, but only on the basis of what I read in – and understand from Biblical prophecy.

Óne suggestion I have to correct in this article is that Babylon as a city should be rebuilt. That is not correct. For the place where Babylon was once located is already a city of significance today and bears the name Hillah. On the outside of Hilla are the archaeological remains of the legendary ancient city. A location that was placed on the list of World Heritage Sites by UNESCO (of the United Nations) last year. Hilla is the capital of the Iraqi province of Babil (= Babel, Babylon), a city of 364,000 inhabitants with a not insignificant university (‘University of Babylon’).

These days I received a fascinating message about major Chinese investments in this city and region. It was read on a website that is part of Refinitiv, a global provider of data and infrastructure for financial markets. The headline above the piece read:

Some excerpts from the message:

Iraq is planning to build a new city in the central Babylon governorate at a cost of nearly 1.5 trillion Iraqi dinars ($1.25 billion), media reports said on Monday.

The project will be financed through an oil-for-projects fund created as a joint venture with China in 2019, Aliqtisad News said, quoting governor Hassan Al-Quraishi. He provided no details of the “New Babylon City” but said it is one of four strategic projects to be presented to the government within the Chinese fund.

The other projects include a motorway linking the governorate with the capital Baghdad and other provinces, phase 2 of a water sewage project in Hillah city, and a new sewage network project at a cost of 1.2 trillion dinars ($1 billion), he added.

OPEC member Iraq and China signed the fund agreement in Sept 2019 providing for the supply of 100,000 barrels per day of crude oil in exchange of execution of projects in infrastructure and other sectors by Chinese firms.

Certainly, there is no global financial headquarters at this location (as the Biblical prophecy speaks of it). But that can change quickly. Internationally, there is great interest and investments are being made in the development and infrastructure of the city and region. In other words: this important part of the prophetic decor is also being built! 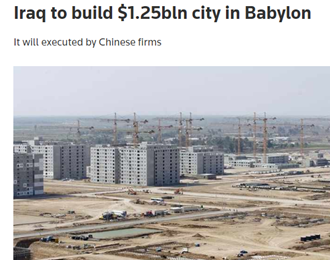