As many as two full chapters in the Book of ‘Revelation’ (17+18) are devoted to the description of Babylon and its fall. Much of these chapters is obviously written in symbolic language: a prostitute dressed in purple and scarlet, sitting on a beast with seven heads and ten horns, etc.. For a clear understanding that need not be a problem, as long as the symbols are explained. Now then, what concerns the identity of the woman, we read the following:

And the woman whom you perceived is the great city… -Revelation 17:18-

In other words, the woman is figurative, the big city is literal. The first is imagery, the second clarification. Revelation 17 and 18 are clearly about a big city. But what great city is that? These chapters speak consistently of Babylon. Below are nine reasons listed why we simply have to take that literally.

Six times in ‘Revelation’, in connection with the big city, the name Babylon is mentioned. Twice even, it explicitly mentions the “great city Babylon” (Revelation 18:2,10). That needs no explanation, it is the explanation!

That in Revelation mention is made of the concrete, geographical Babylon is shown by the fact that in these chapters dozens (!) of quotation are found from Isaiah 13, Jeremiah 25, 50, 51 and other Scriptures. Since all these Scriptures undisputedly speak about the city of Babel, it is beyond question that John is referring to that city.

Babylon’s destruction is connected with “the Day of the LORD” (e.g., Isaiah 13:6). This designation has, in prophecy, always had reference to the time that the Lord, Himself, will appear (e.g., Joel 2:31, Zechariah 14:4). When Babylon will be destroyed, in the future, this implies that there will first have to be a city of Babel, again.

Babel will be destroyed and never again be inhabited, and even “no Arab will pitch there his tent” (Isaiah 13:19,20). Also this, has never been fulfilled. After the Babylonian empire, the Medo-Persian Empire chose its residence, here. Alexander the Great, after his conquest, declared the city to be the capital of his Greek empire. There is where he died at a very young age. In the first centuries of our era, a considerable Jewish community lived in Babylon, and there is where Peter wrote his first letter (1Pet.5:13).

In Babel, the world empires once started (Genesis 11) and there, they will find their end. There is only one city known in history with world domination: Babel. When ‘Revelation’ speaks of a great city, which reigns over the kings of the earth (17:18), we would be able to guess, without it even explicitly being mentioned, that this would concern ancient Babylon.

In Jeremiah 25, it is said that the king of Sesak (a cryptic indication of Babel*) as the last one, will drink of the cup of God’s wrath. This fits seamlessly with the description in ‘Revelation’, where Babylon also will experience the ‘finishing touch’ of God’s wrath.

* This cryptic way of speaking is called an atbach. The name Sesak is composed, respectively, (reckoned backwards) of the 2nd, 2nd and 12th letter of the Hebrew alphabet. When we reverse this and read forward, the name that we see is… Babel.

Babel, which plays such a prominent role in ‘Revelation,’ is situated on the Euphrates. Is it just coincidence that “the great river Euphrates”, on two occasions, is explicitly mentioned in “Revelation” (9:14, 16:12)?

The book of Zechariah was written after the fall of the Babylonian Empire. Nevertheless, in 5:5-11 is described a vision, in which a wicked woman from the land of Israel is transferred to “the land of Shinar”. This is the region where once the city of Babel was built (Genesis 11:1-9). The woman is connected with the symbols for merchandise (an ephah) and money (a talent; ‘lid’ in Zechariah 5:7 is literally: talent). For this woman, in the plain of Shinar, a House will be built. This is presented to happen in the future. The association with Revelation 17/18 is undeniable. The wicked woman comes from the Jewish country – she is the prostitute! Directed from Jerusalem, (the town built on seven mountains, Revelation 17:9!), will be an international trade center (for “the merchants of the earth”; 18:3,11), to be built in the fertile Euphrates valley.

All the reasons I gave, above, are based on the Bible and not on current events. For decades, already, the present-day Iraq plays a prominent role in world politics. Also, the former dictator of Iraq, Saddam Hussein, has tried to restore the city of Babylon to its earlier glory, but more than a museum-city did it not become. So, with apologies for the lack of connecting factors to current political realities, can I, on the basis of the biblical prophecy, but conclude that Babel, as yet, is to emerge on the world stage. Not merely so to speak, but literally, at the old location, in the plain of Shinar. 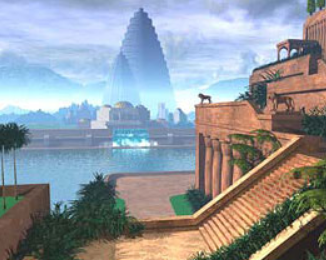