Iraq in the coming decade


The new year and the new decade have only just begun, or the world has already been put on edge. While we wish each other a happy new year, #WWIII is a trending topic on Twitter. The subject of “fireworks” suddenly gets a different charge. The ever-increasing tensions between the West and Iran have meanwhile reached a new high with the missile attack at Baghdad airport. At which General Soleimani, one of Iran’s politico-military leaders and very popular Shiite leader, was deliberately killed by America. There is now fear of a dramatic escalation of the conflict in the Middle East. In a fairly recent past, America has worked with the Iranian general in the fight against IS. But the relationships in the region there are complex and can, as it turns out, change in no time. This is not just about Shiite Iran, which has extended its tentacles everywhere, including in Syria and Lebanon. Iraq is also directly involved here. Not only because the attack took place on Iraqi territory, but also because an important Iraqi leader (Muhandis) was killed. The arbitrary action of America in Iraq is therefore considered a brutal attack on their sovereignty.

The Middle East conflict that flared up high in the new year with this attack could have major consequences. Will this be the cause of a war in the Middle East? And could such a war even be global? And how will Israel respond to this? And what will happen to Iraq? Many observers are crossing their fingers for the developments in this area. Don’t forget that Tehran is a good friend of Russia. And don’t forget that the oil interests are huge. But don’t forget that for the re-election of the American president, a war in the Middle East can be very useful, as Trump himself (albeit unintentionally) said in 2011. These and many other factors play a role in how this development will take shape. No one who knows …

time is running out

Why I point out current events in this first blog of the new year is not to express a political opinion. Not against America, nor against Iran. Also not as a statement about how the Netherlands should behave in the current situation. I am a simple observer who follows the news in the light of Bible prophecy. I know that “the two days” of a thousand years since Christ’s ascension (30 AD) will soon expire. And if the chronology that I have set out elsewhere is correct, a few years later (2034 AD) the year 6000 AH starts. Whatever can be said about these precise dates, these are special milestones. Which is also (carefully) says that time will not be long before the final pieces will also appear on the prophetic chessboard.   In the past century we have seen how the entire Old Testament pattern of nations was (literally!) Put on the map again. After having been away for thousands of years, they reappeared as national states: Egypt, Syria, Ammon (Amman – Jordan), Lebanon and, above all, of course Israel (1948) with the capital Jerusalem (1967). And with the reconstruction of the Jewish State, the ancient enemy appeared in the Gaza Strip at the same time: the Philistines or, in other words, the Palestinians. All as was predicted.

But especially two important pieces on the chessboard are missing until today. In the first place a temple and a corresponding sacrificial offering service in Jerusalem. It will certainly be restored in the time of the end (Mat.24: 15). Everything is already ready and this rebuilding can be realized in a short time. I hope to come back to this on another occasion.

Secondly, what is missing is the city of Babel or, if you like, Babylon. The lack of this city in particular is surprising because at least a few years are involved in the construction of a large city. I know that many therefore wave away the literal restoration of this city and “spiritualize it.” Even the majority of those who properly account for Bible prophecy believe that the future role of Babel will be fulfilled by Rome. Elsewhere I have argued that this cannot possibly be the case. I believe that the first city that the current eon started with (Genesis 11) is also the last stronghold that will be spectacularly destroyed (Jer.13: 19). That has never happened in history and must still take place.

But if the time of the end is indeed approaching and Babel will play a prominent role in it, then it can hardly be other than that this city will indeed be built within a very short time. A large city on the Euphrates River, a river that also plays an important role in the book “Revelation” (9:14; 16:12). The special thing about future Babylon in the land of Sinear is that it will be a Jewish city. It is not for nothing that she is presented as a prostitute, as a counterpart to the bride of Israel. Also think of the vision in Zechariah 5: 5-11 with “the woman in the ephah,” a representation of wicked Israel who is associated with the symbols of trade (talent, ephah) and is moved to … yes, the land of Sinear where a house is built for her. That is unfulfilled prophecy to this day. It would therefore not surprise me if in the next few years the Jewish state gets a “dependance” in Iraq. A world trade center where Jewish capital is flourishing but also dominates the Middle East.

I apologize that I cannot indicate any reason for the latest claims in current events. But I do not claim it as a political analyst, but only on the basis of what I read in – and understand from Biblical prophecy. What everyone can see at the moment is that the situation in and around Iraq is extremely threatening and more unpredictable from a political perspective than ever. But it is precisely then, and why we do well to pay attention to the prophetic word, as to a lamp shining in a murky place, until the day comes (2 Peter 1:19)! 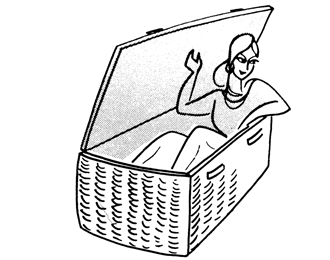