One picture often says more than a thousand words. This is also the case in the Bible. A special and highly remarkable example of this can be found in a rather unknown history in 1 Kings 13. I recently discussed this chapter once and again, and I have dealt with it quite extensively on all sorts of details that I leave behind here.

The point is simply that “a man of God from Judah” is sent to prophesy against the altar that King Jeroboam had erected in Bethel. On the way back, resting under an oak tree, an old prophet comes to him and invites him to return to Bethel to have a meal with him. The man of God from Judah refuses this because God had explicitly forbidden him. But the old prophet surprises him with the false claim that God would have spoken to him. The man of God succumbs to the proposal and returns to Bethel. But there God’s word comes to him again, but now with the announcement that he has been disobedient and therefore will not be buried with his fathers. If the man of God then goes home by donkey, a lion will come and kill him. And then it reads:

This is the picture I was referring to in the first sentence. It functions as a still image in this history. Because if people pass by on the road later, they will still see this scene (13:25). And when the old prophet in Bethel gets to hear about this and goes there again …

…and found his carcass fling on the road. The donkey and the lion were standing beside the carcass; the lion had neither eaten the carcass nor broken the donkey.
– 1 kings 13:28 –

the donkey and the lion

The scene is set down as a monument. The donkey and lion stand like the columns in the temple. With the corpse between them. Motionless, as if they are keeping guard. The lion has killed the man of God but does not eat him. And nothing happens to the donkey either. This scene obviously has a deep meaning. Not only at the time this took place, but even now. Like all Scripture, this history also speaks of “him who would come.” The Messiah. First in humiliation and later in exaltation. First as the humble king on a donkey (Zech.9: 9; Mat.21: 5). But definitively as the royal “lion from the tribe of Judah” (Rev. 5: 5). The two animals, the donkey and the lion respectively, represent the dual coming of the Messiah. Indeed, that is what they stand for.

the corpse of the man of God

And what lies between the donkey and the lion? The corpse of a disobedient prophet … The man of God from Judah is a type of the Jewish people to whom the words of God have been entrusted (Rom.3: 2). Words which, like the words of the man of God, speak of a future king from the house of David (compare 13: 2). The tragedy is that, just like the man of God, the Jewish people also placed more value on false words. Traditions that overrule God’s word. As a result, instead of being moved further (> the new covenant), they returned (> the old covenant) and became disobedient. The people died and ‘disappeared’ among the nations. The corpse of the man of God marks the fatal fate of the people between the first and second coming of Christ. Between the donkey and the lion.

the corpse is guarded

At the same time, the standing lion also guards the corpse. The lion is the reason why the man of God died, but also the reason why the corpse is guarded and kept. Expressed in type, we see here that the resurrected Lion of Judah is the reason that the Jewish people died. But at the same time, that same Lion also watches over the Jewish people because it still has a great future ahead. Because the Jewish people may now be counted as dead, but that is certainly not permanent. Their disobedience became fatal to them in the past, but what will “the taking back be if not life from the dead!” (Rom. 11:15). The corpse of the man of God is guarded – for Israel will revive, “the third day” (Hos. 6: 1-3). After two days of a thousand years, the third millennium will soon begin. The Lion of Judah guarantees that! 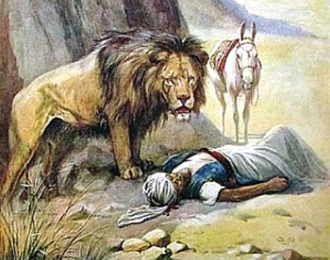