In the current series on “Revelation” I have often pointed out that the completion of the prophecy in that book starts with the opening of the first seal. In chapter 6 verses 1 and 2 we read that John sees a rider on a white horse. This appearance is immediately reminiscent of the rider on the white horse, later in the book (19:11), where it is unmistakably about Jesus Christ (19: 12,13). However, the rider on the white horse in chapter 6 is not Jesus Christ (for that is the Lamb opening the seal; 6: 1), but someone who looks like him. But in what way is he like him?

The completion of the prophetic script begins with someone who will temporarily do what Jesus Christ will finally accomplish. And that is: bringing peace. Hence a white horse. This meaning becomes unmistakable at the opening of the second seal, where we see a red horse appearing and the one seated on it is given to “take the peace away from the earth (or: the land)”. At the opening of the second seal ends, which starts with the opening of the first seal: peace. It agrees with what we read elsewhere, namely that war and destruction will suddenly begin with everyone crying out: peace and no danger (1 Thes. 5: 3).

The end of the sacrificial service in Jerusalem

The beginning of the aforementioned disaster of the red horse (and later also of the black and green horse) coincides with the end of the sacrificial service on the temple square in Jerusalem (Mat.24:15). That sacrificial service is not there yet, although everything that is needed for it has been ready for a long time. We are waiting for the political green light for this. But to date, “the Jerusalem issue” has been subject to a very heavy political mortgage internationally. The enmity of the Muslim world around the Jewish state is the great blockade in this respect.

One of the most remarkable developments of the past year, however, is that one after another Arab country is reaching an agreement with the Jewish state. Since the late 1970s, there were only Egypt and Jordan, but in recent months the United Arab Emirates and Bahrain have been added, and most recently Sudan. In addition to these five, there are five more countries in line that also want to join the so-called “Abraham Accords”. Such as Saudi Arabia, the guardian of the two other Islamic holy places Mecca and Medina. A peace in the Middle East is in the making, yes! Isaac (read: the Jewish state) and Ishmael (read: Islam) meet with patriarch Abraham. I wrote about that revived optimism in the Middle East earlier this year.

These diplomatic breakthroughs took place under the direction of US President Trump and in the background his Orthodox Jewish son-in-law Jared Kushner. Although Trump has built a reputation for fighting spirit, he is a rare example of a US president who never waged a foreign war and brought peace in the Middle East within reach. He gained confidence in the Arab world and at the same time was the Jewish state’s best friend. He thus started his term in office with the relocation of the American embassy from Tel-Aviv to Jerusalem.

It was on the basis of Trump’s diplomatic successes in the Middle East that I suggested several times on the Goedbericht.nl website that Trump is a very good candidate to fill the role of white horse rider in shining armor (Rev. 6). Five Arab countries have now reached an agreement with Israel and five more have yet to follow. How prophetic is that given: ten countries in the Middle East forming an alliance with each other (Rev.17: 12; Dan.7: 24)! Note that the rider on the white horse has a bow, but there is no battle. It is true that an enormous amount of war material is available to the American president, but it was not used to achieve these agreements. Although not decisive, it is curious that the rider on the white horse is given a “crown”, which is called “corona” in Latin. Trump… corona, connect the dots.

With all these (strong and weak) indications put together, it was in my opinion obvious that Trump would win the elections. After all, his target in the Middle East was only half reached, so he needs a second term for the other half. Would anyone other than him be able to continue this success? The results of last week’s US elections, however, now seem to point in a completely different direction. The media and “the Big Tech” (Facebook, Twitter, Google) declared Biden the winner of the election last Saturday. But…its legality is disputed by Trump and his associates. While in 2016 it was the Democrats who suspected Trump’s presidency (the Russians allegedly interfered in the election), now it is Trump and his supporters who are challenging the legality of the results in several states. Rightly or wrongly. How that legal battle will end, nothing can be said at the moment. The legal battle hasn’t even started yet!

In this blog I am not concerned with the political side of this (curious and fascinating) story. What fascinates me is the prophetic side of it. Let me list a few possible scenarios when it comes to the candidacy for the rider on the white horse in Revelation 6.

Trump wins the lawsuits he has filed and he becomes president for the second term (against all odds). Of course, such a victory would be much more spectacular than just emerging as an election winner. And yes, this is an unlikely scenario, but does that argue against or in favor of it? Do we not read of the rider on the white horse “and he went out conquering and to conquer”. In this scenario, Trump could continue his Middle East successes over the next four years and potentially reach an agreement on Jerusalem with room for a rebuilt temple.

The Biden / Harris team will be installed Jan. 20, and as President of the United States, Biden will continue the Trump-initiated Middle East peace process. In that case, the peace process would not be linked to Trump’s person but to his office as US president.

The eventual (false) peace in the Middle East is being worked on by someone who is not yet “in the picture” for it.

I dare not say which of the three scenarios it will be. Will it be Biden? Or Trump? Or maybe another? What I dare to say is that, left or right, the rider will come on the white horse. A false peace is coming in the Middle East and Jerusalem is given a new status. Stay awake! 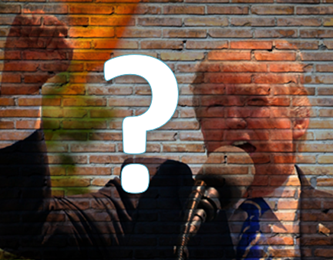