By far the most times in the New Testament the combination Jesus Christ is mentioned. But also the inverse Christ Jesus is used frequently. The exact number is a bit controversial, because source text variations rather differ.

Following King James’ translation, based on the Textus Receptus, the counting differs from the modern translations, based on the source text of Nestle Aland. But I will pay no more attention to that technical difference.

The combination Jesus Christ we see in the Evangels, Acts, the letters of Paul and Peter, James, John, Judas and the Unveiling. In conclusion, in the entire New Testament is spoken about Jesus Christ. That differs with the combination Christ Jesus. Except for a few text-critical controversial examples, Christ Jesus is an (almost) exclusive Paul-expression. In the Dutch translation NBG51 the term Christ Jesus is mentioned 96 times, not less than 95 used by the apostle Paul.

What does this mean? Or is there anyway no problem? In both cases it’s the same person, isn’t it? And moreover, Paul often speaks about Christ Jesus (94 times in his letters), but also 75 times about Jesus Christ. The combination Christ Jesus is surely not an iron law for him. But nevertheless, if Paul, as solo apostle, speaks so many times of Christ Jesus, would it be randomness? Or would he have a good reason to say Christ first and Jesus afterwards? Indeed, I think that good reason exists.

All apostles, except Paul, followed Jesus here on earth. They have been witness of his appearance and his resurrection. The ultimate proof that God made the crucified Jesus to Christ (Acts 2: 36). By speaking about Jesus Christ we follow the historic line. Surely he was born as Jesus and so he lived en died. Christ however is a title (Anointed, Messiah) he received later. In the first place at his baptize in Jordan (Acts 10: 38) and final in his resurrection.

Paul however hasn’t got to know his Lord in this historic sequence. On the road to Damascus the resurrected and glorified Christ appeared to him in a light of glory flashing out of heaven. The first question Paul (in those days Saul) asked, was: Who are you Lord? And the answer was: I am Jesus Whom you are persecuting. From Paul’s personal perspective the resurrected and glorified Christ is coming first. In that way he got him to know and that typifies the phrase Christ Jesus. By calling him Christ Jesus, Paul’s personal story resounds. It doesn’t discredit the historic name Jesus Christ. But by calling him Christ Jesus, he supplemented it in a unique way, how he knew his Lord and how he could make him known to the nations. 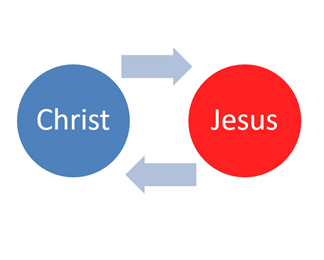