| Blog English | The Wife of Cain

The Wife of Cain


From where did Cain obtain his wife? That is a classic among Biblical questions. However, the answer is pretty obvious. After all, like Paul argued on the Areopagus, God created “every nation of mankind” from one (Acts 17:26). And Cain’s mother received the name Eve because she is “the mother of all the living” (Gen. 3:20). Which means that the whole of humanity is family and the genealogy of every human can be traced back to the first human couple. Moreover, since Eve originated from Adam, the whole of humanity is included “in Adam” (1 Cor. 15:22). A very basal Biblical fact.

Cain married his sister. And during the first generations people essentially married their direct relatives. In the first millennia since Adam, this was not at all unusual. Also Abraham, two thousand years later, was married to his (half)sister (Gen. 20:12). Adam and Eve built humanity from the pure genetic base with which they were created. In the course of generations the DNA started to show defects and by this also the risks of inbreeding increased. Not until the law of Moses, 2500 years after Adam, marriages between close relatives were forbidden (Lev. 18-20).

In Genesis 5:4 we read that Adam “begot sons and daughters”. So Adam and Eve had many more children beside Cain, Abel and Seth. It is even questionable if Cain and Abel were the first children of Adam. God told Eve after eating of the forbidden fruit: “I shall increase your grief and the groanings of your pregnancy” (Gen. 3:16). This formulation suggests that Eve was already acquainted with the difficulties of pregnancy. Anyway, Cain and Abel were the first children after the expulsion from the garden (Gen. 4:1).

Sometimes it is presented such that Cain fled to a land that already was called Nod and that he found a wife there and subsequently founded a big city. But that’s is absolutely not how Genesis 4 presents it to us. After the murder on his brother Abel, Cain was afraid of the revenge of the family (Gen.4:14) and therefore he fled together with his wife to a land that (since he was the first inhabitant), which was called after him. Nod means ‘wandering’. Cain built a stronghold for protection (Gen.4:17) by which he is the founder of the first city, which means a walled residence.

One could even put forward that Cain possibly feared the “Sons of God” also, about whom we read later (Genesis 6) that they took for them “the daughters of the human”. From this bad alliance, giants were produced (Hebr. Nephilim), hybrid creatures. These “sons of God” apparently were pre-Adamitic, (Job 38:7) but were they already on earth in Cain’s days? And if so, where and how? Such questions are justly and why would we exclude options up front? But it is still speculation. Let us “not be disposed above what is written”. 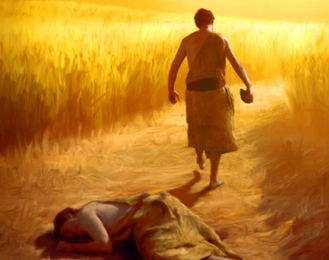