| Blog English | The Bible doesn’t say anything about homophilia

The Bible doesn’t say anything about homophilia


Before elaborating on above-mentioned statement, I first want to define what homophilia is for me. Homophilia is the sexual focus to people of the same gender. Homosexuality is having sex with persons of the same gender. A homophile is not necessarily a homosexual and vice versa. A meaningful distinction which is also valid for paedophiles and paedosexuals. The first refers to a sexual attraction and the second to practice. I think it is a big difference!

The use of the word ‘homo’ (or gay) is confusing, because unclear. ‘Homo’ can point to homophilia as well as homosexuality. By the way, the same is true for the word ‘homophobia’, which is also not clear: to what is phobia referring?

In this blog I ask attention for the phenomenon that in the Bible not a single time is spoken about homophilia. Not a word! Neither positive nor negative. Several passages speak about homosexuality and homosexuals. That is true. But isn’t it remarkable that homophilia is such a big issue in our modern, Western culture, in the Scripture it isn’t even mentioned? We never read about someone ‘coming out of the closet’. Didn’t it exist in those days? Were there no homophiles?

This question may also be expanded to other deviating sexual preferences. And what about transgenders, who were more and more in the spotlights in the previous years? Men who want to be women or vice versa. Those issues don’t play any role in the Scripture. How is that possible? What has been changed? Did people become different?

We should find the answer to this questions in a completely different direction. Mankind didn’t change, didn’t improve or worsen. But the way of thinking has changed radically. From ancient times and also in the Bible, sexual identity was defined in terms of the gender in which you were born: male or female. And to both identities a certain behaviour belonged.

As from the sexual revolution in the 1960s and 1970s, the approach and thinking has been changed completely. Fixed standards and values disappeared. It was also the time in which the faith in the Creator was massively abandoned. Since then, sexual identity is no longer an objective and fixed fact. It is no longer derived from gender, but from feeling and experience of the individual. Because the standard and ‘what’s normal’ disappeared, the emotion, the taste and the personal preference came to the forefront.

In biblical times you were a man or a woman. And so you knew what was normal. When the individual perception was deviant, it pointed to alienation and disorientation. No-one would come up with the idea that he or she was born with the wrong gender. Because your sexual identity was fixed as from your birth. In this way you were made by the Creator. You also didn’t come out of the closet with the underlying thought that you finally came to your ‘true sexual identity’. Because that identity wasn’t determined by subjective feelings, but by nature, the one you are since you were born.

Thus, in Romans 1: 26, Paul speaks of ‘the natural use’ or literally ‘the use determined by the nature’. He places it against the ‘unnatural’ or literally ‘the next-to-nature’ as being a derailment. And he also put a direct link between this derailment and disregarding the Creator (note the ‘therefore’ in Romans 1: 26). The Creator, surely male, a He; and the creation, female (groaning and travailing; Romans 8: 22).

Concept as homophile, transgender, paedophile etcetera, are labels that say something about one’s sexual temptations or taste. For us it is important, but in the Bible it doesn’t matter. The bible doesn’t make a problem of it, it simply doesn’t matter. That’s not because of poor understanding at the time. Or that we should know better now. On the contrary, what we like to call Enlightenment, is by Paul called ‘darkened’ (Romans 1: 21), because there is no light of God (‘as GOD’). In the Bible, sexuality is objective: male or female. And moreover, normative: a man should cling to his wife, and they two become one flesh (=sexual intercourse). That gives grip to every person, male and female, and a compass. 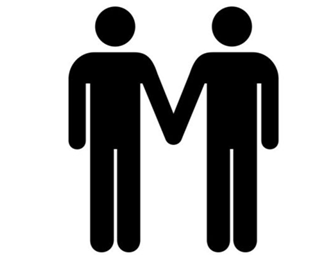