| Blog English | when that which is perfect is come…?

when that which is perfect is come…? 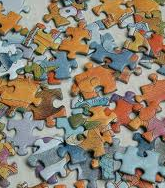 Paul takes the Corinthians on a high road in order to place the questions they had in a proper perspective. The gifts which they considered so very important, were shown to be only of a (very) temporary nature. The gift of tongues would cease and prophesying would be discarded (13:8). When will this happen? Paul answered this question, but, unfortunately, the translators, with the above translation, put us on the wrong track. Because the idea of “perfect” makes us inadvertently think of the new creation, when all the imperfections will belong to the past. But the apostle was not writing about that, at all. Let’s take a closer look.

The word Paul uses (Gr. meros) literally means “part”‘. Paul had recently used it in 1Cor.11:18 (“in part I believe that”) and 12:27 (“all members in particular”). In 13:9 he says,”we know in part and we prophesy in part.” Here a piece of knowledge and there a piece of prophecy, etc.. The revelation of God was not yet complete (Col.1:25) and not yet chronicled. They had to make do with some verbal and written expressions. All very fragmentary.

The Greek word for “perfect” (teleios) indicates something complete and finished. When it comes to quality, it approaches “perfection”, but nevertheless, that word gives a wrong impression. In the LXX, it is often used in connection with the sacrifices, in which an animal had to be “perfect”. Perfect, of course in the sense of: undamaged, having nothing wrong with it. When it comes to growth or development, teleios refers to maturity. Hebrews 5:14 says “solid food is for the mature“. Thus, also, Paul uses teleios in the first Corinthian-letter, three times. In addition to the aforementioned 13:10 in:

Ripe, full-grown. Since the context of 1Corinthians 13:10 also is about the development from child to man “(13:11), teleios refers, unmistakably, to “maturity”. Thus it is not when “the perfect” has come, but when maturity occurs that then prophesying will stop and speaking in languages/tongues will cease.

In the previous blog, I already showed that the contrast in 1 Corinthians 13 was between what will disappear (= tongues, prophesy, words of knowledge) and what remains (= faith, hope and love). Writing about what remains, Paul is obviously referring to the situation on earth, because when the Lord returns, faith and expectation will be exchanged for perception (sight). The gifts of foreign languages and prophesying, therefore, will not disappear when the Lord returns, but at a much earlier stage! “The maturity” is not the perfection that awaits us, but the stage that occurred when the revelation was complete. The complete Word gives us certitude, so that we no longer need to be tossed about by every wind of doctrine. Maturity – no longer unstable, voiceless children. About the latter, Paul writes in Ephesians 4. About that, the next time.