| Blog English | What is “the ecclesia”?

What is “the ecclesia”?


In the New Testament, the word ‘ecclesia’  almost unanimously refers to the collection of believers in Christ. But we need to realise that, next to this application, the term “ecclesia” was already a well-known Greek word and in general parlance, meant the assembly. Not only according to the handbooks but also in the Scriptures. In acts 19 we read that the crowd in the city of Ephesus gathered in the theatre to oppose Paul’s preaching. As always, the assembly took place there and this meeting was also the highest political body of such a city. Up to three times it is called “the ecclesia” in Acts 19 (:32, 39, 41), despite the fact the assembly was illegal. In Acts 7:38 Stephen speaks of the ecclesia of Israel in the desert. That also was the gathering of all the people.

An ecclesia is not just a meeting of any group of people, no, it’s the public assembly. I.e. all the people will be counted as present. When the Scriptures call a gathering of believers the ecclesia, it is a value judgement. An honorary title. Such an ecclesia is locally but also, by definition, universal. “The ecclesia at Corinth” (1 Cor.1:2) is a meeting in a specific place. But make no mistake: it was the people’s assembly at Corinth. The meeting represented all the people and thus “all in every place who are invoking the name of our Lord Jesus Christ” (1Cor. 1:2).

The number of attendees in such a gathering is of no importance. Often the Scriptures speak of “the ecclesia at the home of….” (Rom. 16:5; 1Cor.16:19, Col.4:15; Phil. 1:2). Two or three is just the logical minimum (compare Matt. 18:20), because with less it’s no longer a meeting. The Scriptures also do not know the question of how “house churches” relate to “the local church”. Or how one local church compares to another local church. Or how these communities relate to the universal church. These are all terms and distinctions that are unknown in the Scriptures. The problems that arise with this topic are self-made. It stems from a misunderstanding of what the ecclesia is. “The ecclesia at the home of…” represents the whole people. Nobody excluded. It is therefore also not inferior to the ecclesia in a different place. It has therefore no hierarchy of meetings (synods, councils) above her. She represents the whole people and is clothed with the highest authority.

Where is the ecclesia?

Christ loves the ecclesia (Eph. 5:25). That is not just the sum of all believers. The ecclesia is not the people, but the assembly of that people. It is this public assembly that Christ loves. That people is one, they form one body and as ecclesia they are officially “together with all the saints” (Eph. 3:18).

Like prophesied by Paul, Christendom as a whole is estranged from “the sound teaching” (2Tim.4:3). Denominations wrongly pretend to be “the ecclesia”. Because where authority is granted to words of men (creeds) and one places authorities over the assembly, apparently Christ is not the Head. But also today amidst all religious confusion it still applies that where one is gathered around Christ as Head and his word is spoken that right there is “the ecclesia, which is His Body” (Eph. 1:23). 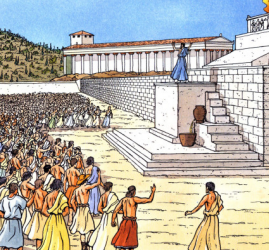