One of the particularities of the Jewish chronology is that since the celebration of the first Pass-over in Egypt they use two calendars. Two calendars that differ from each other by half a year. The one (civil) calendar begins in the month Tishri (September/October) and the other (religious) calendar begins in spring. Because God said at the Exodus:

This month shall be for you the beginning of months. It shall be first for you of the months of the year. – Exodus 12:2-

“This month”, that is the month Aviv (= spring; Ex. 13:4), that later on would be named Nisan (Est. 3:7). The fact that it is here where Aviv is determined to be the first of the months, presumes that before, this was not the first month. Strictly spoken not the moment of the New Year is changed, but the counting of the months. From here on, one would start to count from Aviv/Nisan.

Except the Jewish tradition, there are surely Biblical grounds for the thought that the original year commences in Tishri. We read in Exodus 23:

Three feasts are mentioned here. Of the unleavened bread in the month Aviv. Of the (wheat) harvest, seven weeks later and the festival after the ingathering at the “going forth of the year”. Which points to the grape – and olive – harvest. After this the seventh month starts, in other words, a new year.

In Exodus 34:22 we read something similar:

The festival of weeks shall you observe for yourself, the firstfruits of the wheat harvest and the festival of the ingathering at the revolution of the year.

From the start of human history the year started in the month Tishri, but originally that was the first month. So that when, for example, in Gen. 8:4 it reads that the ark rested on the mountain Ararat on the seventeenth of the seventh month, this corresponds with the month Aviv/Nisan. That is typologically particularly interesting, because the date on which the ark rested, is therewith three days after the date of Pass Over (14th of Aviv). So three days later is the date on which Christ conquered death as the first fruit! The curse was lifted, which is also the meaning of the word ‘Ararat’!

Shortly, the existence of two calendars has Biblical grounds for sure. Moreover, grounds in which magnificent treasures are hidden! 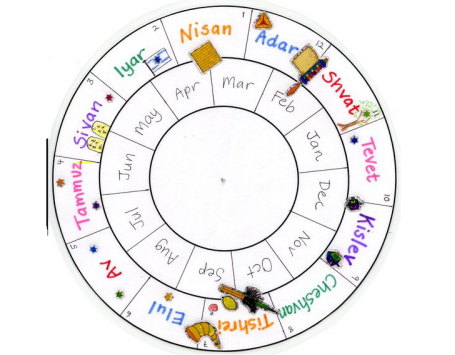