Do you believe Saint Nicholas?


December 6 (in Holland December 5) is the feast day of Saint Nicholas. But did you know that about 1700 years ago this Nicholas of Myra was delegated to the Council of Nicea and fully supported the decisions which were taken?

The reason for the convocation of this council (organized by the Roman emperor Constantine!) was a point of view of Arius from Alexandria, who confessed Jesus Christ as “Son of God”, but rejected that He is “God the Son”, which was claimed by an Athanasius. The council of Nicea stood behind Athanasius and rejected Arius as a heretic. This council is the foundation of Christian orthodoxy: here the doctrine of the trinity was officially accepted by the Christian church and Arias was condemned as a heretic.

The council of Nicea calibrated formulas like ‘one nature, three persons’, ‘God the Son’ and ‘tri-nity’. Therewith they abandoned, explicitly and formal, ‘the healthy words’ of the Scripture. Dozens of times the Scriptures speak of ‘God the Father’, but we never read about ‘God the Son’. It is absolutely right that Arius protested against this. Jesus Christ can impossibly “God the Son’, because the Scripture repeatedly declares: “there is one God, the Father” (1 Corinthians 8: 6; Ephesians 4: 6; John 17: 3). And the Son is “image of the invisible God” (Colossians 1: 15); God’s icon.

The council, in which Nicholas participated with conviction, demonizes those who hold on to the words of the Scripture. As is stated, already in the beginning of the ‘Athanasian Creed’:

And the document ends with this statement:

If you are a member of an Orthodox Church (Roman Catholic, Greek Orthodox, Calvinist, Lutheran, Baptist, Charismatic, Pentecostal etcetera), this above mentioned is part of the creed of your church.

The council of Nicea confirmed the final farewell of the early church to the good message, as preached by Paul to the nations. Officially they distanced themselves from the monotheistic rock of the Scripture. “One God, the Father”, it was absolutely natural for the Jewish writers of the New Testament, but pagan influences in a few ages time, have turned it to ‘trinity’. Disguised polytheism.

By the way, the Council of Nicea resolved another matter and both decrees are indicative of the direction the church took as from then. Nicea also arranged the determination of the date of Easter. Nicea decided that Easter should be celebrated on the first Sunday in spring, after full moon. Therewith Easter was disconnected from the Jewish Pesach. What is more, if Easter occasionally would coincide with Pesach (sometimes that happens), Easter would be postponed to one week later. Until today that is the way the date of Easter is determined. Is not it appalling? Jesus Christ died and arose, during the Jewish Pesach, but Nicea directed that it was not allowed to connect both.

The council of Nicea is one of the darkest pages in church history. Here the Christian church officially derailed and since then the entire (!) orthodoxy is careening on this track. Relegating everybody to hell, who does not believe the doctrine of trinity… it is just a warning.

Dutch little children believe in Saint Nicholas as one who gives them presents. People lose that belief quickly; but an important question remains: Do you believe Saint Nicholas??? 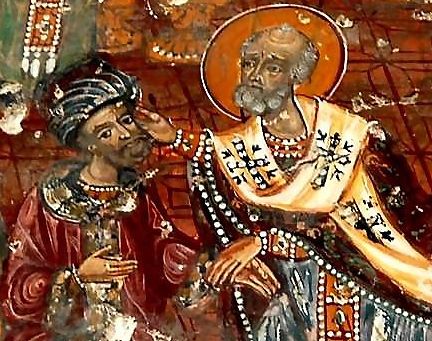