| Blog English | The wedding as transfer

The wedding as transfer 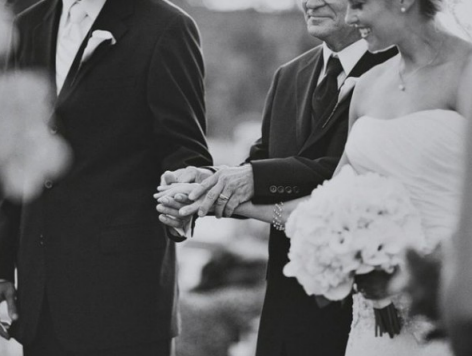 50   Laban and Bethuel answered and said: This matter comes forth from Yahweh (…) 51   Here is Rebecca before you. Take her and go, that she may become the wife of your lord’s son… -Genesis 24-

The verses above illustrate how a marriage was considered traditionally. There are many examples of that in the Bible. A marriage was a family affair. The father formally gave away his daughter to another man. As from her birth the girl belonged to him as a father. As a bride, he entrusts her now to the man to whom she will belong the rest of her life. He is the generator of his daughter and therefore as a father he is responsible for her. Her destiny is his concern. Therefore, to transfer her to the right man is primarily also his concern. Of course he (and his wife) will involve the daughter in the choices he makes and he will weigh her opinion, but he is the one who transfers here. In our western perception the notion of the father who transfers his daughter has greatly faded into the background. In our experience marriage is mainly a matter of the couple itself. They make their choices, purely individually. They do this primarily based on the feelings they have for each other. Moreover, that is a very unreliable base for a relationship which is intended for life. Because in practice feelings of amorousness are not very durable. It is proved that the individualistic Valentine vision which underlies most marriages in the Western world, is not very successful. Or how else should we call it when a large proportion of marriages in our part of the world ends in divorce? Feelings of amorousness are not only precarious, they also make people often choice-incompetent. Usually amorousness blinds, while choosing a partner asks a clear vision. Not the feelings, but the use of good sense is the most important thing in that. In particular parents are supposed to have this ability. They know their child better than anyone else and they are not misled in their judgment by emotional factors that totally do not matter in the long term. This blog is not intended to rehabilitate the use of old habits. Also not to glorify former times above ours. However, I do ask for understanding the wisdom in ancient customs. Still we know the tradition of the father who gives away his daughter to the groom on the wedding day. That is more than a ceremony, it expresses the essence of the marriage. The care and love is formally transferred by the father to the new man in the life of his daughter.