| Blog English | The Palestinians in Prophecy*

The Palestinians in Prophecy*


Besides the resurrection of Israel, actually all nations of the old Testament re-emerged in the past century. Almost daily we hear in the media of the Palestinians, Egypt, Amman (Ammon), Syria, Lebanon, etc.. All of which the prophets have spoken is being restored!  In these times we are currently living.
* Acts 3:19-21

Reconstruction of the prophetic stage

Characteristic of our time is not the fulfillment of prophetic scenarios, but the reconstruction of the prophetic scene . Now ‘the pieces’ are being put ‘on the board’ and soon we will be ‘play the game’ as announced in detail.

Many Christians believe that we are living in the end times . That is a misunderstanding. The end time (as described only in Daniel 11 and 12) is a term that is reserved for the last three and half years before the Messianic Kingdom.
* Daniel 11: 35,40 ; 12: 4,9

In Hebrew  Philistine and Palestinian are absolutely identical words. The theme of the ‘Palestinians in the prophecy’  could also be read as : ‘ The Philistines in the prophecy ‘.  Both of these terms used in this study are ( more or less)  used interchangeably.

not offspring but heirs

The current Palestinians may be no offspring or relatives of the former Philistines . They are  their heirs. They play the same role. Like the Philistines in days gone by , they now live largely in the so-called strip of Gaza.
* Five lords of the Philistines are mentioned: in Gaza, Ashdod, Ashkelon , Ekron and Gath . Judges 3 : 3; 1Samuel 6: 4

The Philistines as nation were from the island of Caphtor . Since they are also called ” the nation of the Caphtorim” most commentators think of the island of Crete.
* Deuteronomy 2:23 ; Jeremiah 47: 4; Amos 9 : 7; Ezekiel 25:16

function of the Philistines

Amos says that just as God delivered the Israelites out of Egypt, so he transferred the Philistines out of Caphtor (Crete). Why? In Judges we read the answer. The Philistines were intended to put Israel to the test.
* Amos 9 : 7; Judges 3 : 3,4

The word “Palestinian” is derived from a Hebrew verb (palasj) which means ‘revolve’, ‘ rotate’. It says something about the people. It wanders everywhere but nowhere they can feel at ease. Not in the past and not at present.

The famous bodyguard of David called the ‘ Kerethite and Perethite‘. Probably all names of the same people, the Philistines.
* 2Samuel 8:18

The Palestinians and their land mentioned very often in prophecy . Many prophecies are dated. In Jeremiah 47 e.g. we find the word of Yahweh concerning the Philistines with the remark ” Before Pharaoh smote Gaza.” So this is a dated prophecy we obviously cannot haphazardly apply on the Philistines of present day.*
Jeremiah 47: 1

a Palestinian state in Psalm 83?

Psalm 83 speaks of a covenant closed between ten nations in order to destroy the name of Israel. The setting is ‘end-time’, the situation as described, has never occurred yet. Can we, in the ten nations mentioned, make a reference to the famous ten kings of the end times ? Anyway, one of them is Palestine (Philistia).
* Psalm 83 ; Daniel 7:24 ; revelation 17:12

Despite the (apparent) peace that will come in the Middle East, it will never really go smooth between the Jewish state and the neighboring Arab countries. In fact, ultimately the nations of the world will massively turn against Jerusalem.
* Zechariah 12: 2,3; 14: 1

In Ezekiel 25 we find prophetic announcements that have to be fulfilled in part . Thus, there is talk about God’s Judgment on Edom by ” the hand of my people Israel.” This has never been fulfilled. Furthermore, there is talk of an eradication of the Philistines, and even ruin the rest of them “on the beach of the sea ” ( the Gaza Strip ) . “And they will know that I am the LORD.” The latter is also unfulfilled prophecy.

Joel 3 speaks of the time when God shall “reverse the captivity of Judah and Jerusalem” “I enter into judgement with them there concerning (…) my allotment Israel, whom they disperse among the nations.” In particular will be called Tyre and Sidon (Lebanon) and all the lands of Palestine.
* Joel 3 : 1-4

Zechariah 9 foretells God’s Judgment on Syria and different Lebanese cities. The Lord will destroy these cities , including all its resources. The impact of this event will be so great that the Gaza Strip will be completely destroyed.
* Zechariah 9 : 1-5

We may assume that in a future peace agreement in the Middle East a tremendous economic upturn will occur. Also, Lebanon and the Palestinians will enormously benefit. It is not for nothing that God will destroy the pride of the Palestinians.
*  Zechariah 9: 6

A few years ago I read in the Dutch magazine “Christenen voor Israel” (Christians for Israel) that God would certainly not allow the formation of a Palestinian state. This remark was probably more motivated by Zionist sympathies than by Scripture Study . Beware of sentiment when examining the prophets. The issue is not whether we agree with or like the issue but “what is written”. Let no one think that the announced demise of the Palestinian state comes forth out of Zionistic boasting. For the Scripture says that also the Jewish land will be completely destroyed . So much even that there will be no living native finding found. The survivors among them will have fled to the desert.
* Isaiah 6 : 11-13 ; Ezekiel 36:33 ; Matthew 24: 15,16 ; Revelation 12 : 6, etc.

There is quite a remarkable promise to the Palestinians who will remain after the destruction of their country. They will receive the status of chief ( CV: mentor ) in Judah, and ‘ Ekron as a Jebusite . ” I.e. the remaining residents of Ekron will live in Jerusalem ( Jerusalem = Jebus ) . Then the time will come when oppressors shall come against Jerusalem no more . The Psalmist foretells:, it will be said of the Palestinians among others : they were born in Zion!
* Zechariah 9 : 7,8 ; Psalm 87: 4 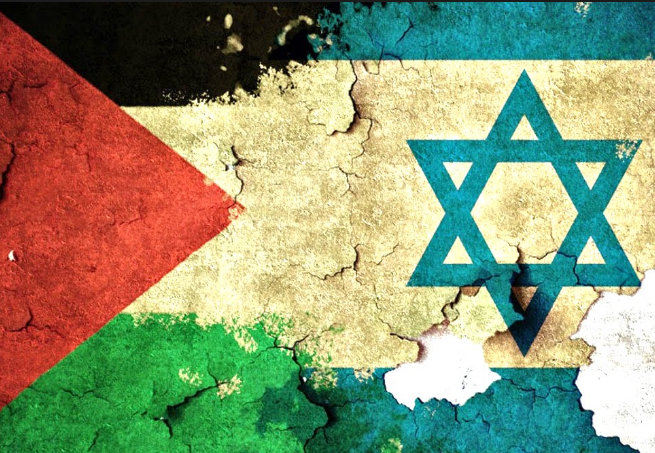