| Blog English | The location of the upcoming temple

The location of the upcoming temple


Over the years attention has been given on this site to the place where the temple(s) of Jerusalem have stood. Last year Reitse Keizer shone a light on this under the title “the forgotten temples” during the GB conference in Garderen. He argued that the Haram al-Sharif, or “the Temple Mount” is actually the location where the Roman fortress Antonia was located. And that the temple of Herod (and earlier that of Solomon) was south of it, at the Gihon source. These findings are mainly based on the research of Dr. E.L. Martin who explained this with verve in his “the Temples that Jerusalem forgot“. You can also find a lot of information about this on YouTube.

a temple next to the Dome of the Rock

Suppose that this insight will soon become mainstream (possibly supplemented by new discoveries), then this will undoubtedly lead to major political and religious surprises. Because it would mean that the current Islamic shrine is no obstacle at all to a Jewish temple to be built. That temple will then be next to it. In a “peaceful coexistence”. Wouldn’t that be spectacular !?

We find a more than interesting clue for this scenario in Revelation 11. There we read about “the two witnesses” who will prophesy “in the city where their Lord was crucified” for three and a half years. Their actions are reminiscent of Elijah and Moses because they have the authority to close heaven during the time of their prophecy so that it does not rain (Elijah) and turn water into blood (Moses). Prior to their performance, we read the following in Revelation 11: 1.2 (translated literally):

And a reed like a rod was given me, and one said Rouse, measure the temple of God and the altar and those worshiping in it. And the court outside of the temple cast outside, and you should not be measuring it, for it was given to the nations, and the holy city will they be treading forty-two months.

the temple including the court

the court outside the temple

But to which “court” does Revelation 11: 2 refer? Not just a court, but “the court”. John refers to the best known fenced area of ​​the city of Jerusalem. In addition, it is also stated about “the court” that “it was given to the nations”. It is not just for the nations, but of the nations. The area does not belong to Israel. What terrain would this refer to other than the Haram al-Sharif, on which two Islamic shrines have been established for thirteen centuries? Even now, while Jerusalem has been in Jewish hands since 1967, this enclosed space is managed by neighboring Jordan. But isn’t this area “the court” of the city until today? And does that not make it understandable that John would not include this area in the measurement of the temple? There is therefore no other option than that the Jewish temple that is yet to be built will be located outside the Haram al-Sharif (for an impression of the location, see this image).

When the two witnesses are killed at the end of the period of twelve hundred and sixty days, we read (in 11: 8):

And their corpses will be at the square of the great city which spiritually, is being called Sodom and Egypt, where their Lord, also, was crucified.

Many translations here speak of “the street” but the word ‘plateia’ has the meaning of ‘square’. Both the German ‘platz’ and the French ‘place’ and the Spanish ‘plaza’ are all derived from this Greek word that indicates a wide space surrounded by buildings. In other words: a square. I see little reason to doubt that the two resemble ‘the square of the big city’, the same location, which is previously called ‘the court’ of the city. This is the so-called ‘temple square’ the enclosed space on which the Dome of the Rock stands. 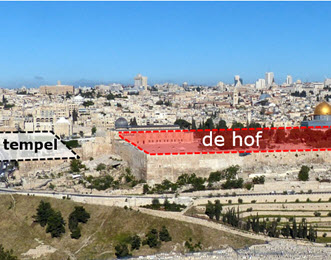