| Blog English | Pierced with a lance – when?

Pierced with a lance – when?


On the cross, Jesus was pierced by a soldier with the spearhead of a spear in his side. That is a known fact. The usual explanation says that this took place after Jesus’ death. This is based on the order as described in John 19: 32-35:

The soldiers, then, came and fractured indeed the legs of the first and of the other who is crucified together with Him. Yet coming on to Jesus, as they perceived He had already died, they do not fracture His legs. But one of the soldiers pierces His side with a lance head, and straightway out came blood and water.

The reading seems simple: the soldiers see that Jesus has already died and so they do not break his legs. Instead, they puncture a lance point in its side, after which blood and water immediately come out of the wound. Nevertheless, a number of questions arise in this scenario. In the first place: what motivated the soldiers not to break Jesus’ legs but to stab him with a lance in his side? If they knew for sure that Jesus was dead, didn’t they have to do this anymore? And if they were not sure, could they have broken Jesus’ legs, just like the co-crucified ones? The second question is: why did Jesus die so early? That is a remarkable fact about which Pilate had already been surprised (Mar.15: 44). And the third question is: how could blood and water immediately flow out of Jesus’ side after the javelin thrust? You would not expect that “immediately” because after stopping the heartbeat, the blood pressure falls away.

These questions arise all the more when we realize that almost all the old manuscripts of the New Testament have yet another witness to the lance in Jesus’ side. This is about the bold sentence below in Matthew 27:49:

And immediately one from among them running and getting a sponge filling it with vinegar and sticking it on a reed, gave Him a drink. Yet the rest said, “Let be! We may see if Elijah is coming, and saving him”. Now another getting a lance head, pierces His side, and out came water and blood. Now Jesus again crying with a loud voice, lets out the spirit.

The bold sentence contains for the most part the same words as in John 19:34, although both sentences are not identical. For example, the order of “blood and water” in Matthew 27:49 is reversed. Why is this sentence missing in almost all Bible translations? While it is generally acknowledged that the above-mentioned version of Matthew 27:49 is indeed found in the best and earliest manuscripts. Among others in the Vaticanus and Sinaiticus. From a text-critical point of view, this sentence therefore undoubtedly belongs in our New Testament. The fact that it is nevertheless missing in the vast majority of Bible translations is only because of embarrassment with the content. After all, Matthew clearly states here that Jesus was killed by the javelin thrust. While John would say that the javelin thrust would have taken place after Jesus’ death. We must indeed properly face that problem, but I would like to emphasize in advance that our misunderstanding should never be the motive for removing a passage from the New Testament. That is why I assume in advance the long version of Matthew 27:49. With the vast majority of handwriting witnesses, it is part of the inspired scriptures.

But now the big question: does John 19:34 actually say that the javelin thrust was in Jesus’ side after his death? For the sake of convenience, I again reproduce the passage from John 19:

The soldiers, then, came and fractured indeed the legs of the first and of the other who is crucified together with Him. Yet coming on to Jesus, as they perceived He had already died, they do not fracture His legs. But one of the soldiers pierces His side with a lance head, and straightway out came blood and water.

If we read verse 34 as a chronological continuation of verse 33, the javelin thrust indeed took place after Jesus’ death. But the sentence can also be read differently, namely as an explanation why Jesus had already died! Jesus ‘legs were not broken because one of the soldiers had already stabbed a lance point in Jesus’ side. Only this explanation harmonizes with the long reading of Matthew 27:49. But not only that: it also removes the aforementioned absurdities from the usual reading of John 19. For it explains (1) why Jesus had already died and his legs were not broken and (2) why immediately blood and water came from Jesus’ side. The javelin thrust was the cause of Jesus’ early death! Jesus was stabbed in his side (near the kidneys), with the pumping heart ensuring the immediate release of the blood and the affected kidneys producing the water (urine).

If we explain John 19:34 from Matthew 27:49 and vice versa (comparing Scripture with Scripture), this means that Jesus was literally slaughtered. The definition of slaughter is after all: killing by bleeding. This procedure is the prescription when slaughtering the Passover, as is the case with sacrificial animals in general. This also explains John’s great emphasis on the fact that he has seen these things himself. Because he continues:

And he who has seen has testified, and true is his testimony. And he is aware that he is telling the truth that you, also, should be believing. For these things occurred that the scripture may be fulfilled, “A bone of it shall not be crushed.”

John bears witness to the fulfillment of the Scripture about the Passover: no bone was to be crushed (Ex.12: 46). What John saw on this date (14 Aviv; Ex.12: 6) was that Jesus Christ was slaughtered (killed by bleeding) and that no bone of him was broken! 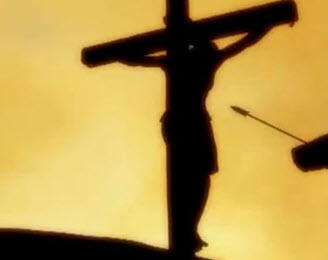