Where sin increases, grace is always greater. But that this would be a reason to continue living in sin is bizarre and absurd for Paul. Because, Paul argues, we “died to sin.” In other words, sin is behind us and we “were sinners,” as he wrote earlier (5: 8).

That we “died to sin”, Paul has to explain. For if we ourselves have not died in the literal sense, what does he mean by “we died”? Paul believes that he can expect his readers to be aware of what he is about to tell. “Or are you ignorant that …?” This knowledge is part of the ABC of his teaching. And indeed, in many other letters Paul also writes about being crucified, dead and buried with Christ.

We ourselves did not die, but we are connected with Christ who died. And since we are identified with him, “his death” is our death. That’s how God reckons. We don’t see that, we don’t feel that, but we would know that. 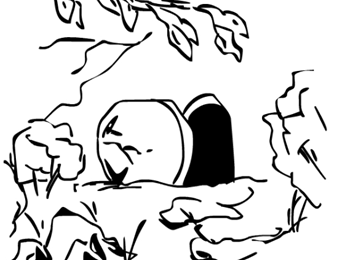