Greet Ampliatus my beloved in the Lord. Greet Urbanus, our fellow worker in Christ and Stachys, my beloved. Greet Apelles, attested in Christ. Greet those who are of Aristobulus. Greet Herodion, my relative.

Again all kinds of names follow that are only mentioned here in the NT. Ampliatus (= ‘enlarge’, cf. ‘amplifier’ = amplifier) ​​and Stachys (= ‘ear of corn) Paul calls both “my beloved”. He appears to have many contacts in Rome of which we have no idea. Likewise Urbanus (= ‘of the city’ > urban = urban) whom he calls “our fellow worker in Christ”. Paul knows of one Apelles (> appeal to?) that he is “attested in Christ”. Apelles apparently passed a test in Christ in an exceptional way.

Then Paul also greets “those of [the circle] of Aristobulus”. Is that perhaps the grandson of Herod the Great and brother of King Aprippa I (Acts 12:1), who died in Rome a few years before the writing of this letter? That link with the royal house of Herod is confirmed in the name of Herodion. This relative of Paul’s (“my relative”) may also have been “of [the circle] of Aristobulus.” Paul’s connections in Rome were, in part, also family relationships. Perhaps that also explains his Roman citizenship (Acts 22:28)? 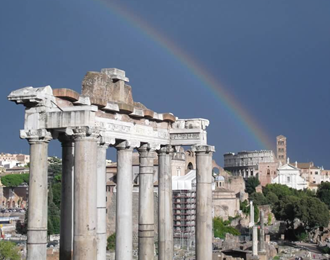