Greet Rufus, chosen in the Lord, and his mother and mine.

A special greeting is given to Rufus (=’red’) “the chosen one in the Lord”. Since all believers are elect of God (8:33), this must be about a special election of Rufus. For a unique task or position.

The only other Rufus we encounter in Scripture is in Mark 15:21, where one Simon of Cyrene is mentioned, a passer-by who was pressed to pick up the heavy beam Jesus carried on his way to Calvary. Marcus notes sideways that this Simon is “the father of Alexander and Rufus”. Apparently the Roman (!) readership of Mark was familiar with these names. So that the Rufus who Paul greets here may have been the son of Simon of Cyrene.

Paul’s connection to Rufus is through Rufus’s mother who is also Paul’s mother. Isn’t that remarkable?! Usually the latter is interpreted metaphorically: Rufus’ mother would have been like a mother to Paul. But why not literally? In that case, Paul’s mother once remarried and Rufus is a son from her second marriage and therefore Paul’s half-brother. Anyway, Paul’s mother was apparently Roman (compare Acts 22:28). Indeed, many roads led Paul to Rome! 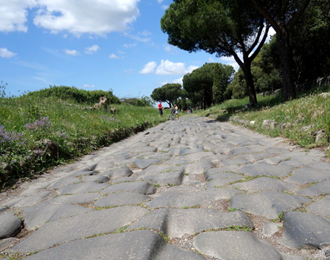