Greet Asyncritus, Phlegon, Hermes, Patrobas, Hermas and the brethren with them. Greet Philologos and Julia, Nereus and his sister, and Olympas and all the saints with them.

With the exception of Hermes (Acts 14:12), we do not encounter any of the nine names mentioned in verses 15 and 16 elsewhere in the NT. Paul’s network of contacts in Rome is remarkably large. It is also very understandable from that point of view that on his intended trip to Spain he has planned a longer stopover in Rome (15:28).

In Rome there were many houses where believers gathered as ecclesia. One such circle was in the house of Prisca and Aquila (16:5) but also in verse 15 and verse 16 numerous names are mentioned along with “the brethren” or “all the saints who are with them”. There was no society, association or organizational umbrella under which one operated, but there was a living, organic unity. The centralist (Roman catholic) model that would later develop in this city is a disfigured caricature of this unity. An institution based on power and money, without any notion of what the Gospel is. True unity is spiritual and is nourished by love for God and for what He has to say (cf. ‘Philologus’ = lover of the word!). 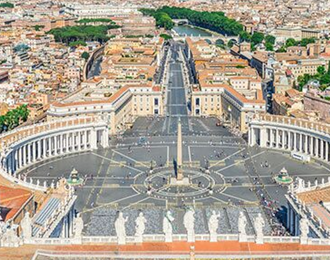