Yet the nations are to glorify God for His mercy, according as it is written, “Therefore I shall be acclaiming Thee among the nations,” “And to Thy name shall I be playing music.”

The plan of old was that God would first look with compassion on the people of Israel, after all, to whom the promises had been given. And that then through a restored Israel the blessings would go to the nations (Acts 3:25). Many prophecies speak of it and so it will be fulfilled. The worldwide messianic empire will emerge from Jerusalem through a restored and regenerate Israel.

In the (interlude) chapters Romans 9-11, however, Paul argued that the present time is an interruption. A break. Israel has stumbled over the Gospel of the risen Messiah. And now because of Israel’s stumbling, the message of salvation goes to the nations (Rom.11:11). That was hidden in the Hebrew Bible and Paul is allowed to reveal it as a secret. The secret is not that salvation goes to the nations (that has been known for a long time!) but that it ends up there through Israel’s unbelief (Rom.11:25; 16:25-27).

The psalms in which David (read: Christ; Acts 2:31) announces that God’s glory will be made known among the nations are today being fulfilled in a previously hidden way. Behold Paul’s unique ministry! 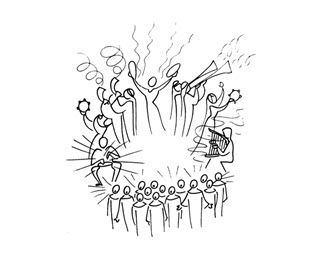