It is ideal not to be eating meat, nor yet to be drinking wine, nor yet to do aught by which your brother is stumbling, [or is being snared or weakened].

We hardly read in this chapter about the reasons why some of Paul’s early readers did not eat meat dishes or drink wine. Except that it was considered “unconsecrated” (unclean) by them. Paul began his argument (:1) by saying that it is “the weak in the faith” who reason thus. But to regard this as “weak” is not to him a condemnation of those who think so. On the contrary, he expressly stands up for them.

The last phrase in square brackets is uncertain because it does not appear in all ancient manuscripts. But it does make it all the more clear why it is good in certain cases to voluntarily (!) renounce completely legitimate practices such as meat and wine consumption. Not because it irritates or angers the other person. But because he stumbles upon it, that is, he stumbles over it. Or he gets entangled and weakened by it. In that case, love, which always seeks peace and mutual edification, should prevail. For “all is allowed me, but not all is expedient. All is allowed me, but not all is edifying.” (1 Corinthians 10:23). 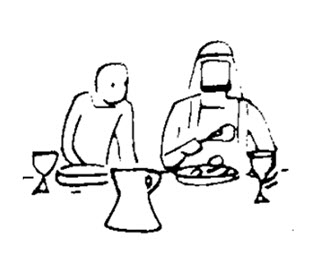