God does not thrust away His people whom He foreknew. Or have you not perceived in Elijah what the scripture is saying , as he is pleading with God against Israel?

Unlike in Romans 8:29, Paul here refers to ‘foreknew’ exclusively to the people of Israel. God does not cast away his people. He doesn’t do that now as He didn’t in the past. Not even when the majority of Israel deviates from God and his word. To support his claim, the apostle takes his readers to a black page in Israel’s history: the time of Elijah (1 Kings 19).

On Mount Carmel God had answered with fire and kindled the sacrifice (1Ki.18). But the wicked royal house of Ahab and Jezebel was furious with Elijah and wanted to kill him, so that he was forced to flee out of the land.

The parallels between this history and Paul’s day should not escape our notice. The great Sacrifice has been made and God Himself has kindled it. But as in the time of Elijah, in Paul’s day Israel’s leaders will not listen and brutally persecute the faithful. And like Elijah back then, Paul is also outside the land. In numerical terms, what is left means nothing. But God reckons differently…! 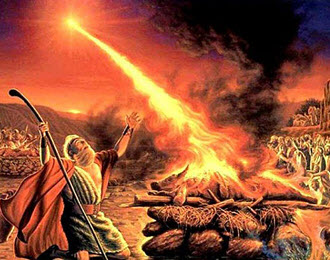