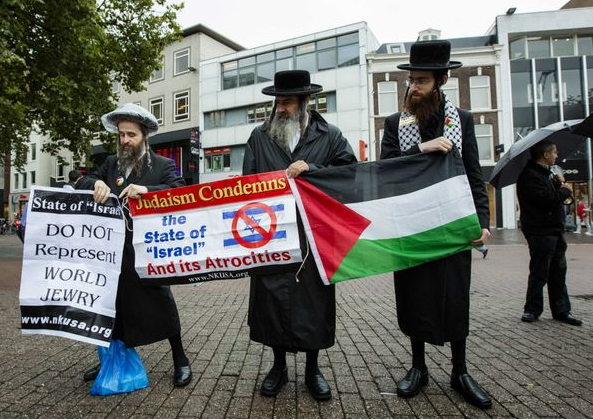 Last Sunday, I saw on the website of “De Telegraaf” (a Dutch Newspaper) the above, remarkable picture. In one of the great cities of our country, a demonstration was organized against the violence of the Jewish state against Palestinians in the Gaza Strip. The demonstration attracted mostly Muslims, but among the protesters and their banners were also these strict, Jewish men. What inspires them? These Jews look with distress to the state of Israel, because they believe that Zionism is a self-willed, forward grabbing on what God has promised to do for them. These Jews represent a view, which a hundred years ago, was generally accepted within Judaism. They believe, on the basis of the Tanakh, that the promised, national restoration of Israel will take place on the basis of repentance (Deut.30:1-3) and when the Messiah will present Himself on that occasion. They view Zionism as a provocation of which not a single blessing is to be expected. According to them, it was an act of unbelief to establish a state, to take the law into their own hands and to use force against aggressors, as now against the Palestinians in the Gaza Strip. However much these Jews constitute a minority and are reviled among their fellow-countrymen, biblically, they have the right on their side. The current Jewish state is, indeed, foretold in the Bible, but it is not the promised restoration. In fact, only when the Jewish nation will be completely destroyed, will the promised restoration of Israel begin (Eze.36:33,34); when no living resident will remain in the entire country (Isa.6:11) and the survivors will have found their refuge outside the land, in the desert; when they will say, “Our bones are withered and our hope is gone; we have been cut off by ourselves” (Eze.37:11). However, before this will happen, there will come peace (1Thes.5:3), but this will turn out to be a false peace, and also, will be short-lived. Today, when we take note of what is taking place in that little country on the Mediterranean Sea and of the bloodshed on both sides, we may be inclined to take sides in the conflict. For those who know the Bible, it is not difficult to discern satanic motives in the Arab peoples’ efforts to destroy the Jewish people. But make no mistake. Because the Islamic nations contest God’s right to the land (Joel 3:1.2), this does not mean that the Jewish people do have the right to claim it. Fact is that the land does not belong to the Arabs and neither to Israel, as such. The land belongs to God (Lev.25:23) and He has promised to give it to a converted Israel. Therefore, on the GoedBericht-site, you will not encounter a political position. God is not a party in this conflict, even though the warring parties like to harness Him for their cart. God is silent… while, in the meantime, the words of the Hebrew prophets are more relevant than ever!