What then? – Moreover, seeing that, by every method, whether in pretense or in truth, Christ is being announced, I am rejoicing in this also, and will be rejoicing nevertheless.

Of course, it was sad for Paul that there were people who took advantage of his imprisonment to assert themselves. While one could know that this would only make his imprisonment more difficult. But it is precisely in Paul’s reaction to this situation that we discover the secret of his always cheerful disposition. We would never have learned that secret if he had only prospered. Because then it is quite natural to be of good cheer.

Imagine you are wrongly imprisoned, and friends abuse that circumstance for their own honor. That doesn’t make you happy. Not even Paul. But still, his perspective is a very different one. Whatever evil motives preachers sometimes had; the resurrected Christ was proclaimed anyway! Count your blessings!

Paul’s focus was not on hardship and that what is missing. He knew a Lord who has everything under control and turns things around for the better. That was not a theory for him, but reality! Where others saw ‘minuses’, Paul saw ‘pluses’ that were not yet finished! Now that’s ‘positive thinking’! 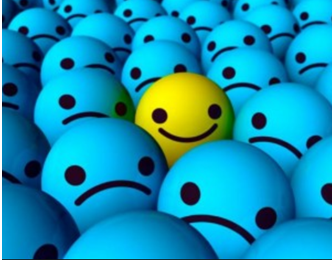