…these indeed, of love, having perceived that I am located for the defense of the evangel, yet those are announcing Christ out of faction, nor purely, surmising to rouse affliction in my bonds.

Paul’s imprisonment had provoked the majority of the brethren to speak the word of God with all the more boldness. Partly with a completely pure motive, out of love. People were stimulated by Paul’s example to openly confess Christ, ‘in the lion’s den’.

But for others, other, impure motives also played a role. Selfish. For them, Paul’s imprisonment was an open vacancy to profile themselves. To compete with other heralds. Although they could estimate that this only increased the pressure of Paul’s chains for him.

Those who preached out of love, without an afterthought, recognized that Paul was appointed by God to witness in Rome. As he had done earlier in Jerusalem (Acts 23:11). At the highest level, up to the praetorium and before the emperor, he was located for “the defense of the Evangel”. The word ‘defense’ in Greek is ‘apologia’. It is mostly used in a legal setting. Paul was set to prove that the good report he preached is true! 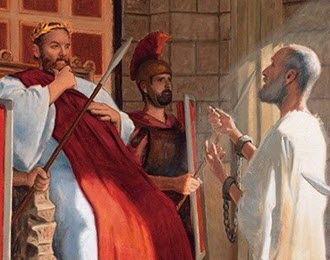