Philippians 1:13 – Testimony at the highest level


… that my affairs have rather come to be for the progress of the evangel. So that my bonds in Christ become apparent in the whole pretorium and to all the rest.

Although Paul was bound in chains, this fate turned out to be all the more for the advancement of the Gospel. Because that is how Paul was allowed to testify at the highest level of the good news about Christ!

The word ‘praetorium’ occurs 8 times in the NT and indicates a Roman headquarters and usually refers to the courthouse or residence of the governor or emperor. Caesarea (Acts 24-26) could be considered, but Rome (Acts 28) is perhaps preferable because Paul, at the end of this letter (4:22), also conveys especially greetings from those “who of the house belong to the emperor”. As a Roman, Paul had appealed to Caesar and God had assured him that he would also stand there (Acts 25:12; 27:24). 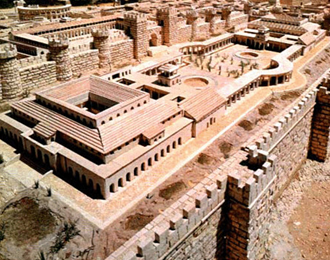