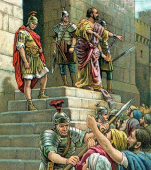 In Acts 22:1-21, we find the last publicly spoken words of the Apostle Paul in Jerusalem. The tension among the audience was palpable. Just a few moments before, the whole city had been in turmoil when Paul had been dragged out of the temple, and the mob had even tried to murder him. But the Romans who did not want a popular uprising, were able to prevent this. From the Roman captain, Paul receives the opportunity to speak to the Jewish people, while standing at the top of the stairs.

Paul, in Hebrew, tells of his education and his career in Judaism. He shares with them how fanatical he was as a persecutor of “the way” and how he even had been mandated by the Jewish authorities to go abroad to imprison followers of Jesus. However, on the road to Damascus he experienced the great turning point in his life, and Saul, from heaven, is called by none other than by Jesus Himself. Saul tells that he could not help but respond to this voice and that some years later, when he returned to Jerusalem, the same Jesus, in a vision, appeared to him again. Then he was told:

Hurry, and come quickly out of Jerusalem, because they will not be assenting to your testimony concerning Me.’ Acts 22:18

Please note: Paul learns of this when he still was named ‘Saul’ (before Acts 13:9). Even then he was assured that Jerusalem would not believe. And when Saul reacts in surprise, he is then told:

Go! For I shall be delegating you afar to the nations. Acts 22:21

So far, Paul could tell his story to the Jewish crowd. But with this last sentence, “all hell broke loose”.

Now they heard him until this word, and they lift up their voice, saying, “Away from the earth with such a one, for it is not befitting for him to live!” Acts 22:22

No additional words, ever, has Paul been able to speak, publicly, in Jerusalem. He is imprisoned and eventually ends up in Rome. From where such hatred? Why did Paul encounter so much more opposition than “the twelve”? Why was James respected in Jerusalem, but Paul expressly not (Acts 21:18-21)? Because Paul’s message, unlike that of the other apostles, was not aimed at Israel’s restoration, but, to begin with, was based on their unbelief and rejection. Paul knew more than his fellow apostles. He knew from the beginning that Jerusalem would NOT believe. It was for this reason he was sent to the nations. Paul’s mission among the nations meant a disqualification of the Jewish people. Paul could rightly declare in Rome:

Let it be known to you, then, that to the nations WAS dispatched this salvation of God…” Acts 28:28

Yes, not only in Acts 28, but already from the beginning of Paul’s ministry.