One of the most puzzling passages in the New Testament are the verses (52 and 53) in Matthew 27 that describe what happened when Jesus died. Below is the representation of the NIV (in bold), including the direct context:

And the tombs broke open. The bodies of many holy people who had died were raised to life. They came out of the tombs after Jesus’ resurrection and went into the holy city and appeared to many people.

The description of this resurrection raises big questions. Why is this resurrection of many not recounted by any of the other evangelists? Elsewhere in the “New Testament” (NT) there is no reference to any of these resurrected dead. And that while a resurrection and appearance of many others besides that of Jesus himself must have had a major impact. And what happened to these people afterwards? Did they, like Jairus and Lazarus’ daughter, later die? Or were they made alive incorruptible? But in that case Christ is not the firstfruits. And does Paul not write that after Christ’s resurrection as firstfruit, the next order is “those who are Christ’s in his presence” (1Cor.15:23)? If so, where should we place this resurrection? And then there is the pressing question why these reposing saints were raised when Jesus died but only went out of the graves three days later. Did they lie alive in the graves for three days?

All these questions make us look very carefully at this passage. It is difficult to doubt that these verses belong in the NT: all major manuscripts contain this passage. So there is no text-critical reason to question the authenticity of this section.   But if we get so hopelessly stuck in our questions about this section, isn’t it obvious that we overlook things? These verses are not in Scripture for nothing? Is the common translation correct? Is there any other punctuation possible? Have alternative translation choices been carefully considered? In short, is there a responsible translation in which the aforementioned questions and absurdities disappear? My answer to that is: yes, and I am happy to give it to the reader for consideration! First let me give the translation as I propose it (see ISA interlinear).

51…and the earth quaked and the rocks are rent, 52and the tombs were opened. And many bodies of the reposing saints were raised up, 53 and came out of the tombs. After His rousing, people entered into the holy city and they are disclosed to many.

Below the explanation per phrase

51…and the earth quaked and the rocks are rent, and the tombs were opened…

The opening of the graves does not stand alone; there is a logical connection with the above. Earth quaked, rocks were rent and tombs were opened.

52… And many bodies of the reposing saints were raised up…

Note that there is no mention here of reposing saints, but about their bodies. The formulation suggests that it is a purely physical event. The representation “raised up” is also in line with this. From the Greek verb ‘egeirô’ used here, the Study Bible says the following (in bold from me; AP):

The verb egeirō means ‘to arouse, to cause to rise, to raise up,’ and in medial and passive forms to be aroused, ‘to rise, to be raised up, to get up’. In general, egeirō is concerned with ‘raising up’ from a lower or lower-ground attitude or condition.

The word Matthew uses is often used elsewhere with respect to the resurrection of the dead. That association is unmistakable (see closing), but the meaning of the word as such is broader and in the context of Matthew 27 the translation “raised up” fits perfectly: graves broke open and bodies stood upright. The rest of the grave was disturbed and bodies were moved.

This is also an understandable consequence of tombs breaking open. Bodies were moved and consequently emerged from the open tombs. So far there is nothing in this description that compels us to think of a resurrection of saints. Graves were broken open while corpses emerged.

53… After His rousing, people entered into the holy city and they are disclosed to many.

Verse 53 is an intermission. So far, Matthew described what happened when Jesus died, and he continues this description in verse 54. In verse 53, on the other hand, Matthew notes what happened after the resurrection of Jesus three days later. Such a foreshadowing is called a flash forward in film and literature.

In the current translations, the words “after his resurrection” refer to the coming out of the tombs of the bodies of asleep saints. However, that results in the incongruous construction that the graves would have broken open, while the bodies would only have come out three days later.

As verse 52 records what happened at the death of Jesus (i.e., broken tombs and bodies of saints that came out of it), verse 53 records when and how this emerging situation was noticed. During the days when Jesus was dead, the Sabbath rule applied and travel was not made. From the day of Christ’s resurrection, however, people traveled back to Jerusalem and passed through the tombs that had been broken open with bodies lying outside. And many have noticed that.

So, those who entered the holy city do not refer in this lecture to the bodies of the reposing saints but to the many to whom this was made known. Note that the sentence in verse 53 contains two verbs that are both in the 3rd person plural: ‘to enter’ (Gr. Claimant chomai) and ‘to disclose’ (Gr. Emphanizo). The first verb refers to the travelers on their way to the city, the second verb refers to the bodies of the saints. ‘Enter’ is in an active verb form while ‘disclose’ is used in a passive verb form. Entering the city is an activity, but bodies that are outside the graves and can be seen are passive. They did not ‘appear’ (active) as most translations say, but they were disclosed.

The punch line of Matthew’s statement

In the explanations I put forward here there is no mention at all of the rousing of reposing saints. All the above complicated questions disappear in one go. What is exposed in Matthew 27:53 is the contrast between what happened in Jesus’ death on the one hand and what happened after his resurrection on the other. When Jesus died, there was an earthquake and tombs opened, but only the bodies of saints were raised up. A shocking event, literally and figuratively, but no life. That had to wait when another earthquake occurred three days later and only one tomb was opened (Mat.28: 2) and one saint, as Firstfruits, was roused from the dead! 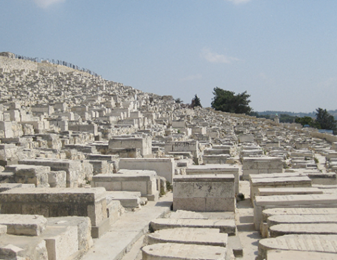