once again: the miraculous feeding 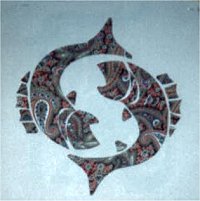 Last Sunday (24 june, 2007), I spoke about the miracle of the five loaves and the two fishes. I showed that this miracle is ‘a picture’ of the present time. * It takes place after Jesus’ rejection in Jerusalem (John 6:1); * It takes place outside Judea, in Galilee, the region of the “Gentiles” (Math.4:15); * It takes place “on the other side of the sea”, where the sea, just like Galilee, depicts the sea-of-nations; * Jesus is seated ‘on high’ (Joh.6:3); * Everyone who comes to Him, receives “abundant life”; * The two fishes have a remarkable connection with the Fish-period of the past two thousand years. After the miraculous feeding, no fewer than twelve baskets of bread were found to be left over. That, of course, is a picture of the abundance that will be part of the blessings for Israel (the twelve tribes), before very long. In other words: it will be after the Fish-period, and thus, in the New Age of Aquarius. Needless to say, perhaps: Aquarius who pours the jug of water on the (dry) soil, is a type of Him who in the near future will pour out His Spirit upon all flesh (cp Joh.7:37-39 and Joel 2:28).   The conclusion of the first miraculous feeding (with the remainder of the twelve baskets) puts immediately a link to the second miraculous feeding, of which we read in Matthew 15 and Mark 8. As the first miraculous feeding speaks of the present time, even so speaks the second miraculous feeding of the future, Messianic kingdom. This is also why the number “seven” stands out: seven loaves to start with and seven baskets left over. The seven refers to the “world-Sabbath”, which will then begin. And how significant is it that this miracle (as so often) took place on the third day (Mark 8:2); just like the wine-miracle at Cana (John 2:1). And indeed, the second miracle happened in the same place (John 4:43.46). Again and again “the third day.” The third day in the Bible refers by definition to the resurrection from the dead. In a more prophetic sense, it indicates the period that follows after the (present) two days of one thousand years (cp 2 Peter 3:8), when the LORD will return to Israel to give them and the other nations, new life (Hosea 6:1-3). How extraordinary it is to consider these things, while “the third day” will not wait unduly long to arrive! P.S. Have you noticed that in all of this, God’s abundance is inversely proportional to human participation in it? When four thousand men were assembled and only seven loaves were available, seven baskets-full were left over. However, when an extra thousand men were assembled, with even less bread available, then, at the end, twelve baskets-full were left over. The enormity of the emergency and the small contribution that man can make, are never a hindrance for God, to reveal His ability to provide abundantly . On the contrary! ——————————— translation: Peter Feddema