I, indeed, baptize you in water, yet He shall be baptizing you in holy spirit.

John the Baptist took his name from his most notable activity: baptizing others. The Hebrews knew water baptism very well. Because a ritual bath was taken on all kinds of occasions. That was part of the ABC of Judaism. But they always baptized themselves.

And then John appeared, whose camel-hair robe and leather girdle, reminded of the prophet Elijah. John preached to Israel a baptism of reflection in view of the Kingdom at hand. He baptized others. Hence “the Baptist”.

John put the meaning of his baptisms into perspective by comparing it to the baptism of the one who would come after him. He would not baptize in water but in holy spirit. Of course, John here refers to his cousin who came after him. To the Messiah who was to go into the Jordan of Death, and then rise from it. An emblem of spirit and life. Baptism in water has traditionally been an important ritual for Israel. But true Christian baptism is not a ritual. Not a drop of water is involved. And it is done by Him who rose first and for all from the waters of death! 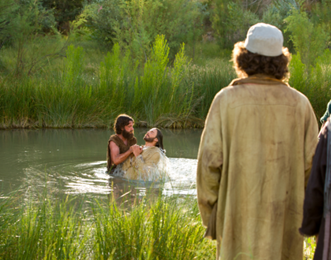