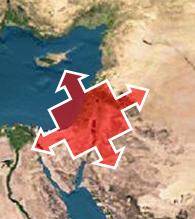 QUESTION: How is God’s instruction to destroy the nations of Canaan to be harmonized with a God of love? ANSWER: 1. Israel was NOT instructed to eradicate the inhabitants of the land, but to drive them out. Ex.23:27 – I will make all thine enemies turn their backs unto thee. Ex.34:24 – I will cast out the nations before thee Deut.4:38 – To drive out nations from before thee greater and mightier than thou art, Deut.6:19 – To cast out all thine enemies from before thee, as the LORD hath spoken. Etc. Only those, who despite warnings, remained in the country and refused to flee, were at high risk of being slain (Deut.12:29). Think e.g. of the inhabitants of Jericho. The inhabitants of Canaan had been alarmed, years before, and knew that God would give the land to the people of Israel. Listen to what Rahab said to the spies:

9 (…) I know that the LORD hath given you the land, and that your terror is fallen upon us, and that all the inhabitants of the land faint because of you. 10 For we have heard how the LORD dried up the water of the Red sea for you, when ye came out of Egypt; and what ye did unto the two kings of the Amorites, that [were] on the other side Jordan, Sihon and Og, whom ye utterly destroyed. 11 And as soon as we had heard [these things], our hearts did melt, neither did there remain any more courage in any man, because of you: for the LORD your God, he [is] God in heaven above, and in earth beneath. Joshua 2

2. God has waited four hundred years before driving away the inhabitants of Canaan. God had said the following to Abram:

13 (…) Know of a surety that thy seed shall be a stranger in a land [that is] not theirs, and shall serve them; and they shall afflict them four hundred years; 14 And also that nation, whom they shall serve, will I judge: and afterward shall they come out with great substance. 15 And thou shalt go to thy fathers in peace; thou shalt be buried in a good old age. 16 But in the fourth generation they shall come hither again: for the iniquity of the Amorites is not yet full. Genesis 15

The inhabitants of the land excessively sinned by committing extreme horrors, such as bestiality, child sacrifice, etc. – Lev. Deut.18:12; but God took until the fourth generation. This was consistent with what we read in “the ten words”:

…visiting the iniquity of the fathers upon the children unto the third and fourth generation of them that hate me; Exodus 20:5

The people of Israel had to wait hundreds of years for the fulfillment of the promise, just because the measure of iniquity of the Amorites was not filled to the full, earlier. The expulsion of the nations in the days of Joshua, centuries later, was a demonstration of God’s patience. 3. The people of Israel also will be expelled, if they persistently disobey their God. In Leviticus 18, we read the following:

24 Defile not ye yourselves in any of these things: for in all these the nations are defiled which I cast out before you: 25 And the land is defiled: therefore I do visit the iniquity thereof upon it, and the land itself vomiteth out her inhabitants. 26 Ye shall therefore keep my statutes and my judgments, and shall not commit any of these abominations; neither any of your own nation, nor any stranger that sojourneth among you: 27 (For all these abominations have the men of the land done, which were before you, and the land is defiled;) 28 That the land spue not you out also, when ye defile it, as it spued out the nations that were before you.

God does not discriminate. Because of their appalling unrighteousness, were the heathen nations finally put out of the land. God did the same with his chosen people: He let them go into deportation and exile. More than once this happened. That they would know that He is the LORD. ——————————— translation: Peter Feddema