In a blog last month, I pointed out the rapid pace of developments in the area of ​​subcutaneous chips. The application of this is so much broader than just payment convenience. The last few weeks I became all the more aware of this by various news items.

The week after the coronavirus dominated the news, the news also came out that Bill Gates, the man behind Microsoft, is withdrawing from his company to devote himself entirely to the work of his foundation to improve the world. For example, he has allocated tens of millions of dollars to fight the coronavirus and the development of a vaccine. But now the special thing: Bill Gates also finances a project in which a kind of tattoo is applied under the skin in which someone’s personal vaccination history is stored.

…. MIT researchers have created (…) an ink that can be safely embedded in the skin along with the vaccine itself, and it is only visible with a dedicated smartphone camera app and filter.

The invisible ‘tattoo’ associated with the vaccine is a pattern consisting of tiny quantum dots (small semiconducting crystals that reflect light) that glow under infrared light. The cartridge – and vaccine – is injected into the skin using high-tech soluble micro needles …

… They have found a secret way of embedding a vaccination report directly into a patient’s skin rather than documenting it electronically or on paper and can significantly simplify (…) accurate vaccination records, especially on a larger scale.

What is interesting in the context of this blog is that such a sign or tattoo does not require any surgery at all, but is simply inserted together with the vaccine. The data is kept under the skin. Technologically, administratively and medically an ideal invention …

Another project that Bill Gates is also closely involved with is called ID2020. This project aims to provide all people, worldwide, with a digital passport for the next decade. The need for this is enormous. Many more than a billion people do not have a passport or are able to identify themselves. Think of refugees who cross the border or end up in a hospital or cannot identify themselves at an embassy and are therefore socially and socially excluded.

With ID2020 as an app on the smartphone, someone gets access to his or her personal profile. Instead of separate documents, all data can be stored in one digital profile in the blockchain, a technology that we know from bitcoin. The data is stored in a decentralized system over which only the person concerned has control. You decide who you give access to which part of your personal information. The system is secured with a QR code as we now know it with digital banking. And the identity is linked (note!) To the unique profile of the fingerprint and / or iris scan.

ID2020 is an initiative that is widely supported (e.g. by Microsoft, Rockefeller Foundation and others) and promoted by the United Nations. On the ID2020 website we read:

In September 2015, all United Nations Member States adopted the 2030 Sustainable Development Goals, including their commitment to “provide everyone with a legal identity, including birth registration, by 2030”.

Why the project was named 2020 and not 2030, De Groene Amsterdammer (Dutch weekly newsmagazine) wrote about this in 2018:

Although the name ID2020 suggests that all this should be finished in two years’ time, they are actually aiming for 2030. ‘Twenty’ only refers to an interim goal to carry out an initial large-scale test, Gruener writes in an email. ‘In addition, the name creates extra urgency and generates evidence that policymakers need to work with this if we want to reach the goal in 2030.’

For those who realize in what special time we live prophetically, these developments are very intriguing. These new technologies bring unprecedented possibilities. And who will object to the storage of data that only you have at your disposal and which you can never lose? Information that is linked to a subcutaneous tattoo (as in the future with vaccination). Or in the case of ID2020 linked to the fingerprint and / or iris scan. So identification by hand or eye (Rev. 13:16).

Nothing seems wrong with such new technologies in themselves. But make no mistake: when everyone will have personal information always and immediately available, it will be easier than ever for a totalitarian regime to demand this information whenever it wants. And those who do not want to participate (for whatever reason) will be easily excluded socially and economically. You can wait for that. The scenario of Revelation 13 is not far away. We will experience special things in the coming decade…! 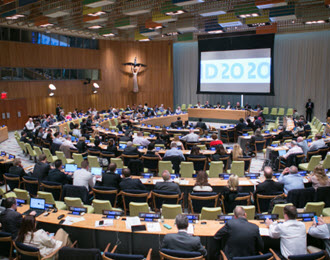