Earlier, in a blog, I expressed my surprise at how, worse than the Corona virus itself, is the panic and craziness that has sprung up everywhere within days. The reactions to the virus are often worse than the disease itself. In this blog I would like to highlight one specific aspect there: the sacrifice of freedom.

difference between democracy and freedom

The concepts of ‘freedom’ and ‘democracy’ are often mixed up. Wrongly. Democracy means that the people elect their own government. Freedom means that a person can think, say, stand and go where he or she wants. Those are two different things. In theory one can live in a free country and a constitutional state (with an independent judiciary), without that government necessarily being elected by the people. Historically, the fact that the people elect their own leaders through elections is a fairly recent invention. A constitutional state differs from a dictatorship in that the government is not controlled in a dictatorship. But democracy can also be dictatorial. This is the case when 51% of the population deprives the freedoms of a minority. In Western Europe, we have experienced in the last century that a dictatorship could develop democratically. Hitler came to power through free elections. A power that manifested itself totalitarian from the start. Totalitarian means: power is total and all freedoms are subordinate to the dictated interest.

What we have seen in Europe for a few weeks now is how in no time a crowd is willing to give up fundamental freedoms for fear of an imminent (temporary) danger. The general lockdown that is currently being advocated for means that residents should not be allowed to cross the border, they should not be allowed to move freely, they should not go out on the street, not even get out of their house or take a walk. And those who do not adhere to it, will be fined. Until recently, free countries change into a police state! This imposed deprivation of liberty is totalitarian to the letter.

They who can give up essential Liberty to obtain a little temporary safety deserve neither liberty nor safety.

In totalitarian regimes (imaginary or not) dangers are always used as an argument to limit freedom. It is an alibi for abuse of power. Isn’t the very first task of the government to safeguard the freedom of its subjects? And in so far as the government has other tasks (such as keeping dangerous viruses out), is it not always secondary?

Even now the argument of safety is heard in all kinds of keys. Because yes, “society must be protected against the danger of a dangerous virus infection.” But have you ever heard that as an argument for deprivation of liberty before? For example, two years ago when no less than 9400 people died in our country during the winter season (that is, on average more than 60 per day!) From a flu virus? Those who wanted to protect themselves against the flu had to avoid contact with the virus. For the elderly and other high-risk groups, this has always been the guideline during epidemics. But please note: that was always voluntary. Each person decides how much risk he or she is willing to take. That is also the essence of freedom. But what is now going on in large parts of Europe and elsewhere is of a completely different order. Because as is also the case in dictatorships, people are forbidden to cross the border, go out on the street or even walk the dog.

how much is freedom worth to us?

The question what this blog is about is not how serious the threat of the Corona virus is. Nor is the question whether and to what extent a lockdown is more effective than “building group immunity”, which Prime Minister Rutte spoke on television earlier this week. No, the first and most essential question is: how much is freedom worth? The freedom that the government has been given to guard it. And then I find that it appears that very little is needed to sacrifice that great good. The measures now called for undoubtedly set yet another precedent. Because if this is a motive for sacrificing freedom, what will be the next alibi? The imminent rule of “the Beast” from the peoples world will be totalitarian (Rev.13). The minds are already prepared for this. 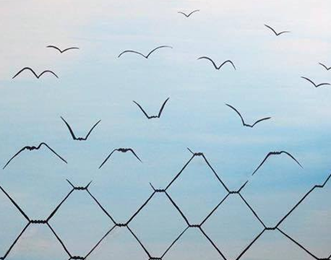