The apostle Paul teaches in his letters that the one who believes, shares in the position of the risen Christ. The fact that Jesus died for us, doesn’t mean in Paul’s letters that Christ died in our place. Indeed, that would mean that we wouldn’t need to die. However, Paul’s education is that when Christ died, we died with him. Christ died to take us with us through the death into the Life. For when Christ was roused from the dead, we were roused with him. He was roused to give us the life that was revealed when he resurrected. Life that left the death behind! Christ died in order to arise and to conquer death.

what do you see?

Christ’s resurrection is a historical fact. However, our vivification is a promise: we will share the life of resurrection with him. That is our destination. Só we will be ultimately, definitively. But it’s much more than that. For that’s how GOD is already seeing us now! Such as a sculptor envisages the ultimate result already during his work. He works towards that result. For an observer that stone, the sculptor works on, is “reality”, for the sculpture that is only a snapshot. For his “reality” (not yet seen by the observer) is the end result. For the sculpture the statue already exists and he only needs to remove what doesn’t belong to the statue. The perception of the sculpture is not a vague abstraction, but it just enables him to do (here and now) what he does. With this way of ‘watching’ he would not be able continuing his art.

to reckon with what GOD is seeing

This illustration of what a sculptor ‘sees’ (it could also be a painter or a potter), makes clear what’s Paul’s perspective of our present existence on earth. Drawing on our physical eyes and our corresponding perception, we consider that existence as “reality”. Paul doesn’t He learns us observing with GOD’s eyes. And to reckon with that perspective.

Thus you also, be reckoning yourselves to be dead, indeed, to Sin, yet living to God in Christ Jesus, our Lord.
-Romans 6: 11-

For GOD we were sinners (Romans 5: 8) and we are justified (Romans 6: 7). That’s not an ideal situation to pursuit. Or a dream we should try to reach. It’s the way GOD observes us already! And we are subsequently taught to reckon the same. We are connected with Christ and where he is, there we are. Not because we see it or feel it, but because GOD sees us in thát way and there. Our life is above, with Christ in GOD.

But if our life (=Christ) is above, why are we downstairs, on the earth? The answer is surprisingly logical: we seek the things which are above! Our existence her on earth may be our ‘experience-reality’, it doesn’t count.

as living in the world

Listen to what Paul wrote to the Colossians a bit earlier:

If, then, you died together with Christ from the elements of the world, as living in the world, are you subject to decrees…
-Colossians 2:20-

Note, Paul doesn’t say: do just like you’re already above, with Christ. No, the opposite is the case. Our life is hidden with Christ in God and our existence in the world is only ‘pretending’. It exists, but it doesn’t count. It’s not more than ‘hors concours’. So much Paul relatives our existence on the earth. As he writes to the Corinthians:

So that, if anyone is in Christ, there is a new creation: the primitive passed by. Lo! there has come new!
-2 Corinthians 5: 17-

We would be inclined to say that the new creation is waiting the future. That may be, but for Paul it’s already reality “in Christ”! Or, as he writes to the Galatians:

With Christ have I been crucified, yet I am living; no longer I, but living in me is Christ. Now that which I am now living in flesh, I am living in faith that is of the Son of  God, Who loves me, and gives Himself up for me.
-Galatians 2: 20-

Also here the phrasing is extreme. I’m crucified with Christ and roused. Thát’s how God sees me. Who am I to contradict? Only because I still don’t see or feel it? I (Greek: ego) am not living anymore. Christ is living in me! And for that part I’m still living in the flesh, I’m living in faith. Not my belief, but the belief of the Son of God. Only by believing in thát way and counting in thát way, my existence on the earth has a tremendous meaning and a shining perspective!

We, then, were entombed together with Him through baptism into death, that, even as Christ was roused from among the dead through the glory of the Father, thus we also should be walking in newness of life.
-Romans 6: 4- 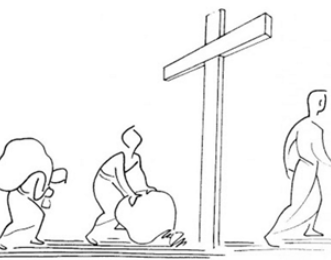