It will not have escaped the regular visitor to this website that GoedBericht stands for what Paul writes in Romans 1 about “natural use” (: 26.27). He thereby refers to the fact that the masculine is compatible with the feminine and vice versa. That is an anatomical fact: they belong together like a key in a lock. Or, something more ambiguous, such as a sword in a sheath (Lat. Vagina). This anatomical disposition is also a biological fact. Because the gender difference is made with respect to producing new life. Any other sexual combination is infertile by definition.

portrayal of the Evangel

Those who alter the truth of God into the lie, and are venerated, and offer divine service to the creature rather than the Creator, Who is blessed for the eons! Amen! Therefore God gives them over to dishonorable passions. For their females, besides, alter the natural use into that which is beside nature. Likewise also the males, besides, leaving the natural uses of the female, were inflamed in their craving for one another…

The truth of GOD is that He (!) Begets new life as the Creator and takes care of the creation that came from Him. The Creator is masculine versus creation that is feminine. We also see this in Romans 8 where creation plays the role of a pregnant woman (“in labor”; 8:22). It is in happy expectation because the Creator by means of resurrection (> erection!) has begun new life in her. The sexuality between men and women is a representation of the Evangel! Without that reference to the Creator, only ‘common sex’ remains – “passions without honor.”

The argument of “nature” has been challenged in many forms in the last (roughly) fifty years by the gay movement. She emphasized that homophilia is innate (“born this way”) and is fixed in its genes. This claim has been so widely accepted that even the pope recently confirmed it. The gay movement has always felt very well that this claim is a powerful weapon in its struggle. This is because it undermines the idea that gay sex is “counter-natural”. Because how is that to be sustained if homophilia is fixed in the genes? Even if you think of a genetic defect, it still comes from nature.

The peculiar fact arises that while the assertion “homosexuality is innate” has ensured broad acceptance in society. On improper grounds, as was already argued on this site in 2008. But in the meantime the claim is now openly doubted and contradicted within the scientific world. Even renowned scientists within the LGBT community have abandoned the idea. Last Saturday, “de Volkskrant” (Dutch daily newspaper) published an essay entitled “Are gays born this way?” in which the author (who is gay) argues that there is no scientific evidence for the existence of a “gay gene” or that homophilia would be caused by hormone fluctuations in the womb. The decades-long search for DNA has yielded nothing in this regard. And studies with identical twins did not provide the evidence that they were looking for. In the animal world, homosexual behavior is a well-known phenomenon in countless species. But then as part of what would be called “bi-sexual behavior” among people. Exclusive homosexuality is rare. Homosexual behavior is often caused in animals “for lack of better”. A phenomenon that we also see among people. Think of prisons with only men, where one is dependent on each other for sexual contact.

On YouTube you can listen to a recent TedTalk from Lisa Diamond under the title Why the “born this way” argument doesn’t advance LGBT equality. She is an American professor of psychology and gender studies and argues that there is no scientific evidence for the claim that homophilia is innate. I think it is a rather shocking conclusion. Because does that not mean that Western society has been turned over the last decades under a false pretext !? Nevertheless, the outcome of the research does not cause this American professor to abandon the LGBT ideology. On the contrary, she says she is happy with the research results because if sexual orientation is not fixed in the genes, then that only gives people more freedom of choice. Less dependence on “nature” means more human autonomy, she argues. Diamond also no longer speaks of sexual preference but of sexual orientation. Preference is innate and fixed, orientation, on the other hand, is a much more fluid concept, she argues. People can, she describes, move from straight to gay or transgender throughout their lives. Or combine preferences (bi-sexuality).

One could argue in a different direction with this argument. Because if sexual orientation is not innate, then gays could also be changed. Lisa Diamond, as a distinctly feminist LGBT person, is obviously horrified by such a conclusion. Nevertheless, she also mentions some convincing arguments against “homotherapy”. She states: people can indeed shift in sexual orientation, but where this happens, it happens spontaneously. Never due to external pressure. Nobody can edit that with someone else. She shows a list (5’59) of previously prominent “conversion therapists” (> homotherapy) who now admit that this treatment does not work. And as far as it works, it is only counterproductive. If these therapists had listened to the apostle Paul, they could have known. In Romans 7 he describes that whoever tries not to desire, activates desire …

not innate, but genetic influence

The observation that homophilia is not innate does not mean that there are no hereditary factors involved. It is the well-known “nature-nurture” story. One type of person is more susceptible to developing homosexual feelings than the other type. For example, it is common knowledge that sensitive and often artistic boys are more susceptible to becoming gay than more masculine types. But it is the combination of genetic and environmental factors that is decisive.

An example of an environmental factor. Sensitive boys who play with girls and dolls are told, for example, by their father that they are “not a real guy”. Such repeated messages can cause them to doubt their sexual identity at an early stage. Pressing them to do boyish things does not help. It might even confirm their doubt. Because not what they do, but what they think they are, causes confusion about their sexual identity.

not necessarily a choice

With the foregoing, it has hopefully also been made clear that gender disorientation, although not congenital, is not necessarily a personal choice. Because already in the first years of life, a “button” may already have been unconsciously changed. Even if at a later age there is still a clear view of the sexual identity (male or female), this does not mean that damage from previous years can be undone.

Whatever the case may be, the latest developments in the field of psychology and gender studies are particularly fascinating. For is it not revolutionary if unintentional but nevertheless unambiguously by science and even by the LGBT community, Paul’s words about nature are confirmed ?! 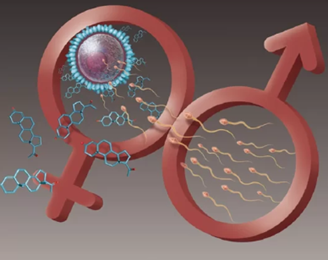