But then, indeed, having no perception of Gd, you wre slaves of htose who by nature, are not gods. Yet now, knowing God, yet rather being known by God, how are you turning back again to the infirm an poor elements for which you want to slave again anew?

Earlier, Paul wrote about Israel “under the law” in the we form (3:23,24). Now he is addressing his (mainly) non-Jewish readers in Galatia. They had no (revelation) knowledge of God, no matter how religious they were. But instead of the one GOD, they served ‘gods’, which are idols by definition (1Cor.8:4-6).

Through Paul’s message, the Galatians had come to know GOD, or rather, they were known by God. For the initiative lay entirely with God: He had foreknew, predestined, called and justified them (Rom.8:30).

And now Paul asks the Galatian believers who allowed themselves to be Judaized : how can you now return to “the weak and poor elements” by submitting again slavishly?! In fact, the apostle equates Judaization with their previous idolatry. Judaism (as ‘preservation’ of the old covenant) and idolatry are both ‘religion’ in the proper sense of the word (re + ligare = to bind again). A system of servile rules. The Galatians were ‘back to square one’… 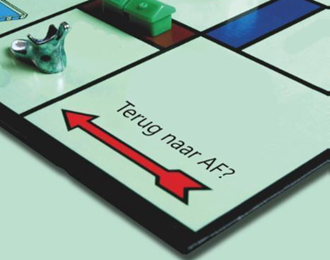