… how are you turning back again to the infirm an poor elements for which you want to slave again anew? Days are you scrutinizing, and months and seasons and years.

The Galatians had (largely) a background in idolatry (4:1). That religion was especially dominated by the calendar and the cycles of celestial bodies. The Galatian believers had turned away from the idols, but now they allowed themselves to be snared by Judaizers and thus were again subjected to the observation of “days and months and seasons and years” (similar formulation to Genesis 1:14).

In the Judaism that the Galatian believers were embracing, these times each play a major role. Check it out. In the first place there is the observance of Sabbath days. But every new moon is also a happening (Num.28:11) as are the annual high times such as Passover, Shavuot, Yom Kippur and Sukkot. And further, in Judaism one also observes specials years such as sabbatical years and jubilee years.

The Galatians were called in Paul’s gospel “into the grace of Christ” (1:6) without any religious obligation to the calendar. Such duties were a thing of the past. But now the Judaizers came to tell them to observe the Judaistic calendar from now on ! Basically (elementary!) this meant a return to religion. 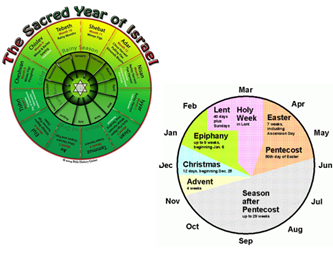