… His Son, come of a woman, come under law, that he should be reclaiming those under law…

God’s Son is born “under law.” Does that contradict the previous where we read that the period under the law was until Christ? No, this contradiction disappears the moment we come to understand that the name Jesus refers to Him who was born in Bethlehem and walked here. The honorific Christ, on the other hand, refers to the risen Christ (Acts 2:36).

The period of the law certainly did not end with Jesus’ birth. For Jesus was born of a woman, “under law” and that regime lasted until his death. It is Jesus Christ’s death and resurrection that marks the turning point. Since his death, “the old covenant” has officially ended. The Man (read: the Lord) has died and the woman (read: Israel) is no longer under the law that bound her to the Man (Rom.7:2). So that the law was not up until Jesus, but up until Christ, the risen one.

Jesus died in order to rise. In His death and resurrection He redeemed the people who were “under the law.” This mighty fact is the basis for the new covenant (Heb.13:20)! 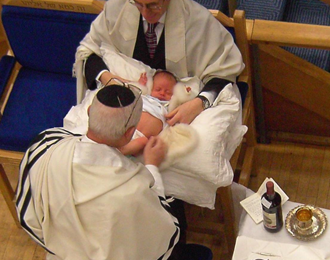