Galatians 4:30– Either/or and not and/and


But what is the scripture saying? Cast out this maid and her son, for by no means shall the son of the maid be enjoying the allotment with the son of the free woman.

How should the conflict in Galatia be resolved? By making a compromise? That would be a typically human solution. Hence Paul asks, “What is the scripture saying ?” And for that he now elaborates on the story of Hagar and Sarah and their two sons. They represent the old and the new covenant respectively. Flesh and Spirit. Law and grace.

In the history of Genesis 21 it is either Hagar and Ishmael, or Sarah and Isaac. It was impossible for them to live together under one roof. Abraham had a lot of difficulty with that (Gen. 21:11), but God agreed with Sarah: the maidl with her son had to go. Yes, Ishmael also received promises (Gen.16:12) and like Jacob later, he would have twelve sons (Gen.25:16). But the promise was not for him but for Isaac only.

Church history has always tried a combination of ‘law and evangel. A balance of both. Wanting the opposites at same time. But that is impossible . It is either the Judaizers or the Evangel as Paul preached it. 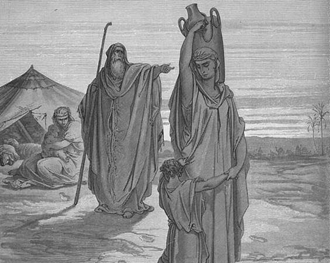