Now you, brethren, as Isaac, are children of promise. But even as then, the one generated according to flesh persecuted the one according to spirit, thus also it is now.

Being a child of Abraham is not everything. So was Ishmael after all. The question in this passage is: who is your mother? The slave or the free? Isaac was a child of promise and begotten “according to the Spirit”, that is: begotten by resurrection power from a ‘deadened’ father and mother. It also ties in with the earlier quote from Isaiah 55:1, which speaks of the numerous progeny that would come from the barren one.

But now Paul goes one step further. Where there is the contrast ‘slave’ and ‘free’, ‘flesh’ and ‘spirit’, a conflict between the two principles is also inevitable. Isaac “was weaned” or no longer on the mother’s breast and could now stand but immediately became the object of ridicule from “the son of Hagar the Egyptian” (Gen. 21:9; Egyptian > slavery!). Similar to the Galatians who also were beyond the time of ‘mother’s milk’ and were now supposed to be able to stand themselves (5:1). Like Isaac, they too were pursued (= persecuted) by the slave girl’s son: Judaizers who begrudged them the “freedom in Christ”… 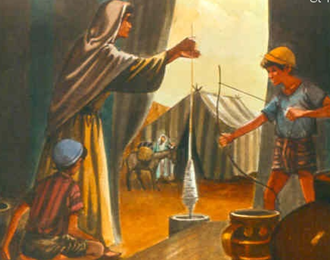