Now I am saying, for as much time as the enjoyer of an allotment is a minor, in nothing is he of more consequence than a slave, being master of all, but is under guardians and administrators until the time purposed by the Father.

Although a new chapter begins here, Paul simply continues his argument about “enjoyers of the allotment” or (for convenience) “heirs”. Earlier, Paul argued that the law had been deployed for Israel until Christ, as a ‘pedagogue’ (child nanny) (3:23-26). This already contained the idea that for fifteen centuries “under the law”, the nation of Israel was regarded as an infant.

In the verses above, Paul elaborates on this immaturity. In practice, the apostle states, an infant child has just as little to contribute as a slave. Even though he is legally the designated owner of everything. But as long as he is still being patronized and his property is outsourced to trustees, the ownership (de facto) means nothing.

The position of immaturity ends formally with “placement of a son” (4:5). That is the solemn occasion in which the child gets the place of a son. In Judaism, this custom is known as the “bar mitzvah.” From that moment on, the child is counted as a man: mature. What this means, Paul is going to explain next… 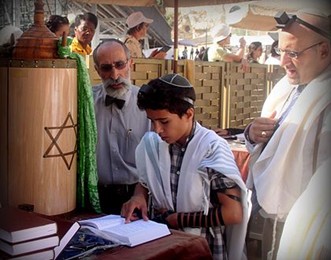