Galatians 3:24 – A pedagogue to Christ


So that the law has become our escort to Christ that we may be justified by faith.

In the previous verse we read that before “the faith” came (ie of Jesus Christ), we (=Israel) were garrisoned under the law. First there was “the promise” that God gave to Abraham. Four hundred and thirty years later the law (3:17) came to serve temporarily “until the seed should come” (3:19), i.e., Christ. The function given to the law was “on behalf of transgressions” (3:19) and to put the people into custody (3:23). This insured custody is called “our escort (pedagogue)” here. This word comes directly from the Greek (> paidagogos) and refers to one who supervises a child, watches over and keeps it under control.

This “control” is typical of the fifteen centuries that Israel was “under the law” as an infant as a child. That regime officially lasted until (the resurrected) Christ. Since then, his faith guarantees the justification of all mankind. “…as it was through one offense for all mankind for condemnation, thus also it is through one just award for all mankind for life’s justifying” (Rom. 5:18; 3:23,24). That is the communication that the Good News (=the Evangel) makes to everyone. Happy who can say ‘Amen!’ to that! 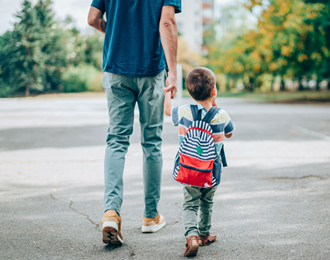