Galatians 3:19 – Directly and via via

Paul argues that the law (under the old covenant) had the character of a temporary and thus transient arrangement. “Until the seed (= Christ) should come.” To emphasize the subordination of the law, Paul points out another difference from the promise God gave to Abraham. While God made his unconditional promise directly to Abraham, He gave the law to Israel through angels (messengers). And not directly either, but through Moses as mediator (cf. Deut.5:5). So the law came to Israel through two intermediaries.

That the law was given to Moses through angels is assumed to be known and we find that given in several places in the NT. In Acts 7:53, Stephen says to the Jewish people, “You got the law for a mandate of messengers…” (see also Heb.2:2). God Himself is invisible (John 1:18) and He was seen (until the Word became flesh; John 1:14) only through angels. Anyway, God personally gave His promise to Abraham, but via-via He gave the law to His people. 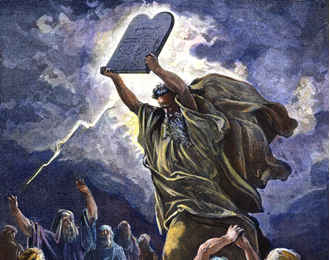