| Blog English | Galatians 1:21 – In the regions of Syria and Cilicia

Galatians 1:21 – In the regions of Syria and Cilicia


Thereupon I came into the regions of Syria and Cilicia.

Paul’s visit to Jerusalem had to be abruptly ended because, as before in Damascus, an assassination attempt on him was also planned there. He was taken to Caesarea from where he was sent to Tarsus (Acts 9:29,30) and with it returned to his native city (Acts 22:3). Tarsus is located in Cilicia and together with Syria these two regions formed the Roman province of Syria-Cilicia.

For many years Saul labored in these regions. In the book of Acts, after his departure to Tarsus (9:30), he gets ‘off the radar’ only to come back into view at 11:25. There we read that Barnabas visits Saul in Tarsus to take him to Antioch, the capital in the region of Syria. There they taught together for a whole year (11:26) and also transferred a collection to Jerusalem (Acts 11:30; 12:25), without incidentally meeting the apostles. Paul therefore does not include that visit to Jerusalem.

Apart from his contacts with Peter and James (1:18,19), Paul had no connections with the apostles in Jerusalem until fourteen years after his calling (2:1). How, then, can Paul’s Evangel be traced back to them? 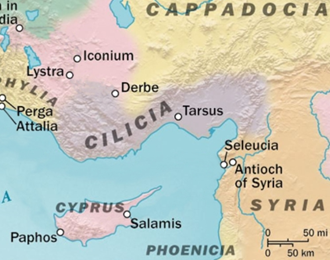