Yet  I was unknown by face to the ecclesias of Judea which are in Christ. Yet only they were hearing that “He who was persecuting us, now is evangelizing the faith which once he ravaged”.

After Saul’s visit to Jerusalem, he evangelized for years in the regions of Syria and Cilicia the faith which he destroyed before. Only the last year of that period, in which he ended up in Antioch through Barnabas, is described by Luke (Acts 11:25).

Because of this prolonged sojourn far beyond the Jewish land, Paul was unknown by face in the ecclesias of Judea. By Judea, Paul probably refers here to the Roman province (cf. Syria-Cilicia in 1:21), which also included the areas of Samaria and Galilee. Only in Jerusalem was Saul an ‘old acquaintance’ as he was educated there. Moreover, during his short visit to Jerusalem (1:18,19), besides Peter and James, he also met some fellow believers (Acts 9:26-30). That’s about it then.

Until the meeting described in Galatians 2, Paul had little or no contact with Jerusalem. And insofar as there has been, it was to tell them something (1:18) or to deliver a collection (Acts 11:30). And certainly not to be instructed by the apostles. 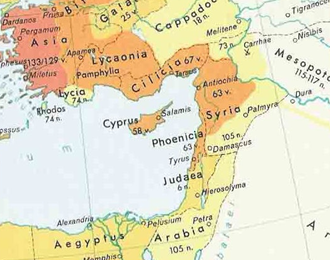