Galatians 1:18 – To relate my story to Cephas


Thereupon, after three years, I came up to Jerusalem to relate my story to Cephas, and I stay with him fifteen days.

Three years had passed since Paul’s last visit to Jerusalem. He left there as the most fanatical persecutor of the (in his eyes) pernicious sect of the Nazarene but he returned turned 180 degrees. He would have had to leave Damascus to save his life and his stay in Jerusalem would be equally turbulent (see Acts 9), but Paul is silent on both matters here. His account here only intends to show that his ministry is completely separate from the apostles in Jerusalem. That is why he did not go to Jerusalem until three years after his calling. Certainly, in Jerusalem he met Cephas (=Peter), but of the apostles he has seen none other than just “James the brother of the Lord” (1:19).

For two weeks, Paul visited Cephas. In the Greek verb he uses in this context (“historeoo”), we immediately recognize our word “history.” Paul did not visit Peter to receive a fifteen-day crash course from him, on the contrary, he went to Peter to tell him his story! Not Paul but Peter would be informed! 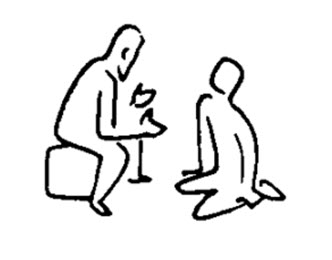