Galatians 1:17 – The return to Damascus


..neither cam I up to Jerusalem to those who were apostles before me, but I came away into Arabia, and I returned again to Damascus.

The sojourn in Arabia about which Paul writes can only be found here. Luke is silent about it in Acts 9. It apparently took place right after his recovery from blindness (ie between Acts 9:19a and 19:b). It is not stated how long Saul’s stay in Arabia lasted, but it is stated that he afterwards returned to Damascus. In Acts 9:19-25 Luke describes the further adventures of Saul in the city.

Saul immediately went to proclaim in the synagogues of Damascus that Jesus is the Son of God (Acts 9:20). Imagine the consternation there: the man who had a reputation as a persecutor of the name of Jesus (and for that reason was also in Damascus) and who now forcibly proved from the scriptures what he first fought fiercely! People were perplexed and it did not take long before an assassination attempt on him was plotted in the Jewish community. When Saul got wind of this, however, he managed to escape Damascus by a shortcut through the city wall. Back to Jerusalem… where it would be just as dangerous. 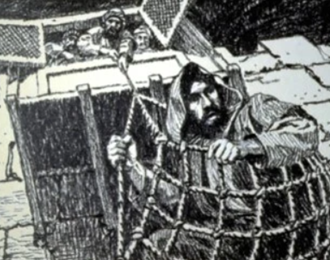