Galatians 1:17 – I came away into Arabia


…neither cam I up to Jerusalem to those who were apostles before me, but I came away into Arabia, and I returned again to Damascus.

Paul makes it clear that his Gospel and ministry is completely separate from people and also independent of the earlier apostles. He was called far beyond the land and far from Jerusalem. That’s typical!

After Saul was called, he was escorted to Damascus because he could no longer see because of the heavenly light. Blind he dwelt in the house of Judah (!) until on the third day an Ananias (> Chananjah = merciful be Yahweh!) came by, after which the scales fell from his eyes (Acts 9:7-19a). And then Saul leaves for Arabia, a visit that Luke is silent about in Acts 9.

The name Arabia we come across again in Galatians 4:25 as the area where Mount Sinai is located (Gal.4:25). How remarkable! The Lord had told Saul that his appearance would be followed up (Acts 26:17) and the first thing Saul does as soon as he is able is to leave for Arabia. The area where the Lord once appeared and taught Moses (cf. Gal.1:12). Paul was expressly not taught and instructed by ’the twelve’ but personally by the Lord Himself! 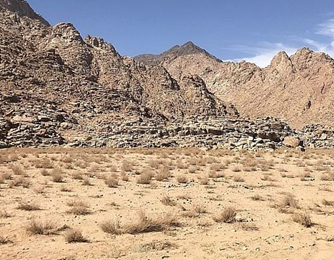