And if you shall make an altar of stones for Me you shall not build it with them trimmed; in case you have swung your sword over it then you have profaned it.

An altar is a platform that serves as a place to make a sacrifice. The altar that Israel was to make was not to have been worked with human hands. The next verse adds that one would not climb to the altar by stairs either. For to do so would profane the altar. Both determinations are characteristic. When it comes to approaching GOD, human work is not appreciated or even tolerated.

An animal was slaughtered in front of the altar and ascended on top of the altar as a sacrifice to God. The slaughter speaks of the cross of Golgotha. The sacrifice, on the other hand, refers to Christ who rose. The empty tomb is the place of exaltation! It was not human hands that rolled away the great stone. It was GOD himself who raised Christ from the dead. That is why GOD is not served by climbing up a staircase to Him. That is called religion. Man does not ascend to GOD, but GOD descends to humanity. 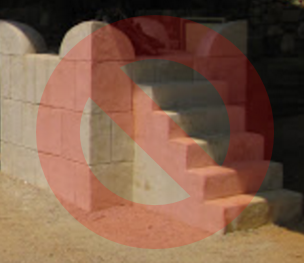